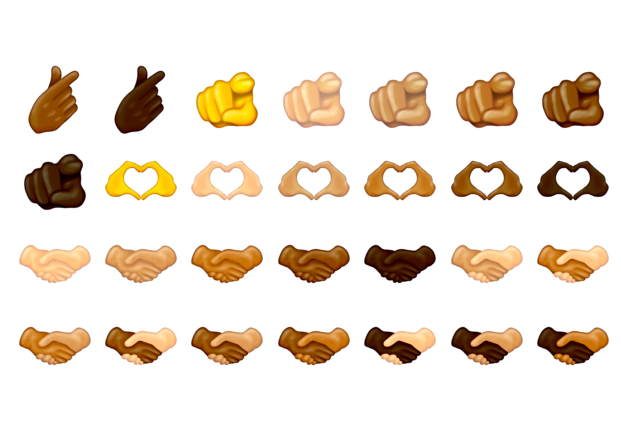 A preview of the latest set of over 40 potential new emojis, many of which focus on gender neutrality and diversity, was released by Emojipedia shortly ahead of World Emoji Day, July 17. In past years emoji have come a long way in terms of improving gender and cultural inclusivity. Previous releases have included varying gender, skin and hair colour as well as emoji representing different disabilities (hearing devices, prosthetics, a white cane, guide dogs and wheelchairs) and cultures (traditional clothing, headscarfs and headdress). The new Chair of the the Emoji Subcommittee for the Unicode Consortium, the official gate-keeper for new emoji, Jennifer Daniel, is a strong advocate for more inclusive and thoughtful emoji and is already working on new ideas (her previous creations include Mrs Santa Claus, Woman in Tuxedo and Man in Veil). Improving representation in emoji design is a noble endeavour, of course, but where do you draw the line? By the end of 2021 there will be a total of 3,353 Unicode approved emoji and about 70-100 new ones are approved each year. Also, as academic and acclaimed author Ian Bogost points out, no matter how many more emoji are added, it will never be possible to represent “the entire gamut of human experience”; some people will always be left out. Indeed, a survey conducted by Adobe last year on frequent emoji users in seven countries (US, UK, Germany, France, Japan, Australia, and South Korea), found that 83 % wished for a more inclusive representation. In particular, respondents said greater options were needed to help communicate important personal concerns such as localized cultural touchstones, gender/sexual identities, and the spectrum of users’ abilities. Many groups are looking to the future with hope. LGBTQI2+ users, emoji users with a disability and multilingual emoji responding to the survey said they felt confident that emoji could become more progressive in the next five years. Interestingly 76% of respondents also said that emoji are an important tool for creating unity, respect and understanding of one another. The potential role of emoji in educating children, and indeed people of all ages, to diversity is a subject that is currently being explored.

Increased representation at the price of universality?

Prof. Bogost says that the increased selection will affect each symbol’s flexibility to stand for something bigger. This risks eroding the “universality” of emoji and their role as an “ideographic language”, even as it aspires toward illustrative inclusivity. Shigetaka Kurita, the Japanese designer who has been credited for creating the first set of 176 emoji in 1999, says that he envisioned his set of emoji as ideograms to represent broad ideas, and that contemporary emoji may have strayed from this founding principle. In the traditional view, for example, one emoji representing a glass of wine would be sufficient – there would be no need for color variants. The glass could also suggest that it’s time for drinks, depending on the context. Emoji are instead becoming more and more specialized.

Local non-Unicode-approved emoji on the rise

Some communities have not felt sufficiently “represented” by Unicode-approved emoji and have created their own emoji reflecting local culture and values. It started with Finland, whose Ministry for Foreign Affairs published a set of 56 country-themed emoji in 2015. The collection includes emoji for traditional sports and activities (cross-country skiing, sauna, Finnish baseball), animals (reindeer, ringed seal), and Finnish natural phenomena (White Nights). In Africa, a 21-year old from the Ivory Coast, O’Plerou Grebet, has created more than 350 downloadable emojis with West African cultural references. His emoji include traditional foods, games, means of transportation, ritual masks and musical instruments. What if other countries or communities follow up on this new trend?

Emoji as a universal language?

If it were possible to agree on a common meaning for each pictograph and on common rules of grammar, could emoji become a universal means of communication? Italian linguist and academic Francesca Chiusaroli and her team have explored the potential of emoji as a universal language and made a very convincing case for this with the publication of “Emoji Pinocchio”, written entirely in emoji. The book was compiled from translations voted among suggestions coming from the Twitter community. The book comes with a preface explaining the rationale of the project, a detailed glossary, with some clever and delightful entries, and a few pages of simple and intuitive grammar rules. At cApStAn we find this field of research interesting and will be following developments closely.

Meena Das, an activist from IN NextGen, a network of college students and recent graduates with disabilities says that “If young people get accustomed to seeing such emojis on a daily basis, it subconsciously increases awareness about diversity in them”. Jennifer Fane, associate lecturer in health and early childhood education at the Flinders University (AUS) says they may also provide opportunities for young children and indeed people of all ages to engage with and have access to a living language that is representative of them and inclusive in ways that words cannot always as easily offer.