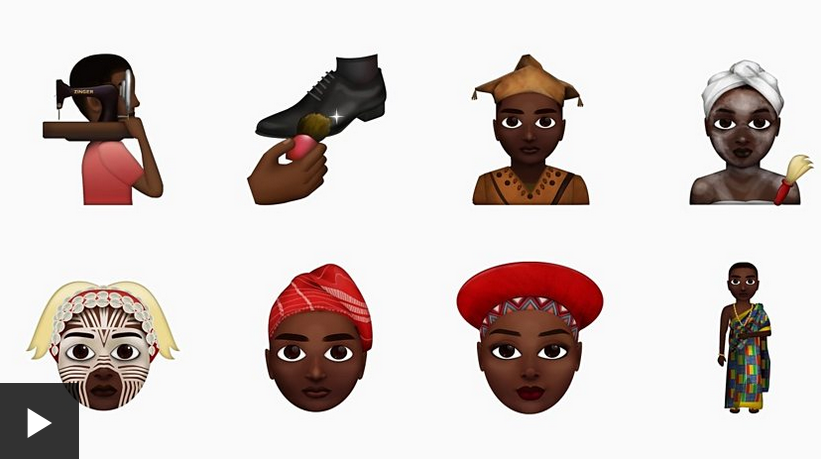 Published in: Fun with languages

As of October 2019 there are 3.019 officially approved emoji. Anyone can submit a proposal to Unicode and make their argument for inclusion of a particular emoji – this has worked well in past years to get emoji that better represent diversity and accessibility, in particular the latest batch, issued in March 2019. However, the increased selection is eroding each symbol’s flexibility to stand for something bigger, argues the author of an article in The Atlantic, Ian Bogost. (1) The original emoji were pictograms or ideograms, he adds, and worked like international signage. They conveyed meaning by resembling an object., e.g. the original emoji for cocktail looked like a glass but one could imagine using it to suggest that it’s time for drinks, or to indicate that you’re waiting at the bar, depending on the context. Emoji are becoming more specific and less flexible, he says, and this changes their semiotic function: the visual “language” is shifting away from abstract, ideographic uses and toward specific, illustrative ones.

Stephen Harrison, author of an amusing article for Slate, makes makes a strong “philosophical case” against the introduction of new emoji. (2) The author takes the example of a request to include a white wine emoji which was refused by the Unicode Technical Committee earlier this year (emoji for red and sparkling wines already exist). He quotes Shigetaka Kurita, the Japanese designer who has been credited as creating the first set of 176 emoji in 1999 as saying that that he envisioned his set of emoji as ideograms to represent broad ideas, and that contemporary emoji might have strayed from this founding principle. “Because it makes inputting them too difficult, there might also now be too many [emoji].” This traditional view of emoji, says Harrison, might support the status quo: one emoji representing wine rather than color variants. Accepting the white-wine emoji could have opend “a can of (pink, brown, and gray) worms”…

No matter how many emoji are added, it will never be possible to represent the entire “gamut of human experience”, says Bogost. Unless one accepts them as symbols of broader concepts. Some countries/cultures have probably not felt sufficiently “represented” and this has led to a few cases of “country branding”. It started with Finland, whose Ministry for Foreign Affairs published its own set of country-themed emojis in 2015. The 56 emoji collection includes emoji for traditional sports and activities (cross-country skiing, sauna, Finnish baseball), animals (reindeer, ringed seal), and Finnish natural phenomena (White Nights). (3) In Africa, a 21-year old from the Ivory Coast, O’Plerou Grebet, has created more than 350 downloadable emojis with West African cultural references. His emojis include traditional foods, games, means of transportation, ritual masks and musical instruments. (4) To our knowledge only two of the Finnish emoji have been accepted by the Unicode consortium (sauna and wooly socks) but all are available as stickers. It is too soon to say if any of the West African emojis will be accepted.

To conclude, the shift in the function of emoji towards specificity and away from abstraction may well compromise their potential to become a universal language and we may see the rise, on the contrary, of more country-themed versions.

See also our articles on emoji as a potential developing language @ https://bit.ly/350Hv4j and https://bit.ly/2NDSKdf . We were particularly interested in the experiment conducted by Italian linguist Francesca Chiusaroli, whose aim was to explore the potential of emojis as a universal means of communication, and who makes a very convincing case for this. “Emoji Pinocchio” is written entirely in emoji, it comes with a preface explaining the rationale of the project, a detailed glossary, and a few pages of simple and intuitive grammar rules.