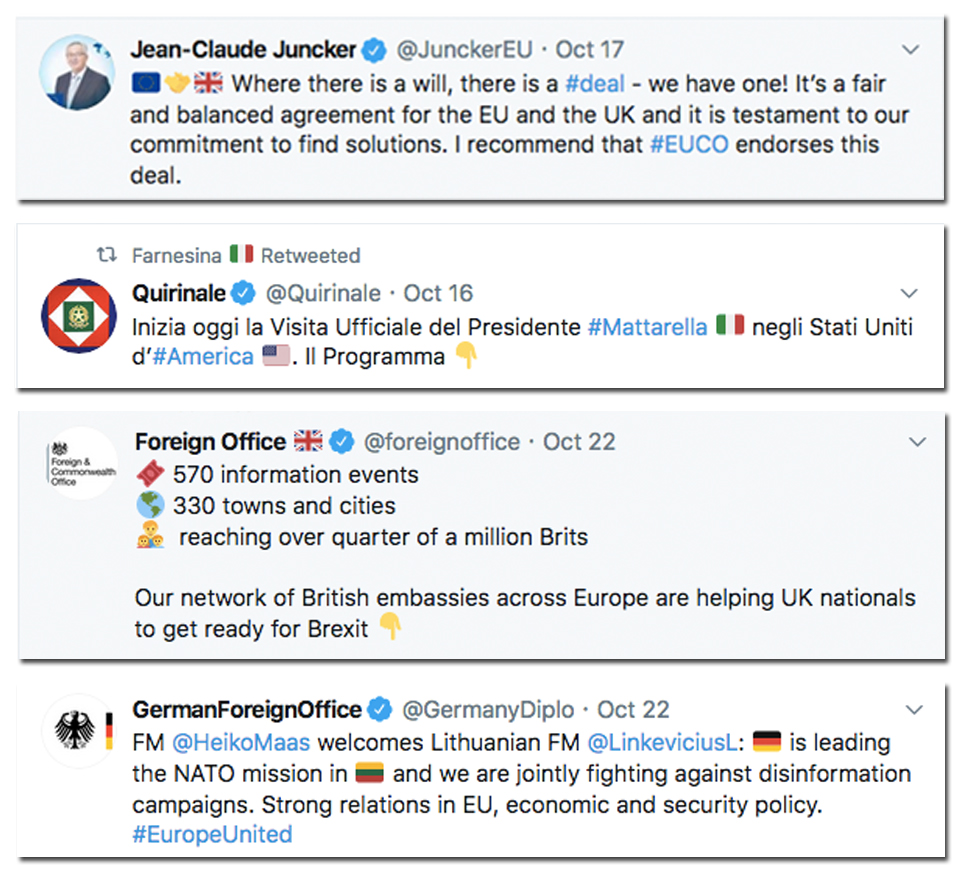 On October 17 2019 EU Commission President Juncker announced the Brexit deal on his Twitter account with three emoji: 🇪🇺🤝🇬🇧. Examples of other politicians or institutions that regularly use emoji include the UK Foreign Office, the Italian and German Ministries for Foreign Affairs, Australian foreign minister Julia Bishop and Argentinian President Mauricio Macri, to name but a few. A 2018 study by BCW (Burson Cohn & Wolfe), a multinational PR and communications firm, found that 97% of the heads of state/government and foreign ministers of all UN Members States are present on Twitter, 94% on Facebook and 81% on Instagram. (1) According to the study the use of emoji, in particular flag emojis, has become widespread in governmental tweets as they make politics and foreign policy more approachable and help target and engage a younger audience (unfortunately no numbers are provided). Julia Clarke, a journalist for The New Statesman, goes so far as to say that emoji are “the promised land of diplomatic history”, have “the potential to speak across borders to a new, global citizenry”, and could represent the “Esperanto of the digital age”. (2) Clarke warns, however, that emojis can tend to the “crass and immature” and their meanings are “both overly limited and hazardously slippery”. There are several known cases in which their use has backfired or caused offense (3). “Few are expected to guard their choices of expression closer than diplomats”, says Clarke, so caution must be exercised. For this reason, Tom Fletcher, former UK Ambassador to Lebanon, is quoted in Clarke’s article as saying “we are a long way from an emoji being used in an official statement, though I may be wrong”. This was in 2016. Juncker’s recent tweet announcing Brexit proves he was.

2) “An alien for Putin: are emojis changing the face of diplomacy?”, Julia Clarke, The New Statesman: May 27, 2016: https://www.newstatesman.com/science-tech/social-media/2016/05/alien-putin-are-emojis-changing-diplomacy

3) In 2015 Australian Prime Minister Bishop’s use of a red-faced emoji to describe Putin created an uproar: “Emojis for diplomats: Storytelling via round smiley faces, thumbs up, and flags”, Medium, July 14, 2017: https://medium.com/digital-diplomacy/emojis-for-diplomats-b6e51e6f1781

In 2015 former US Secretary of State Hillary Clinton asked students to say how they felt about college loan debt in three emoji and it totally backfired: “Hillary Clinton’s attempt to use emoji backfires”, MSNBC, December 8, 2015: http://www.msnbc.com/msnbc/hillary-clintons-attempt-use-emoji-backfires

See also our article on “Emoji are Great and/or They will Destroy the World”, cApStAn blog, July 24, 2018: https://www.capstan.be/emoji-are-great-and-or-they-will-destroy-the-world/