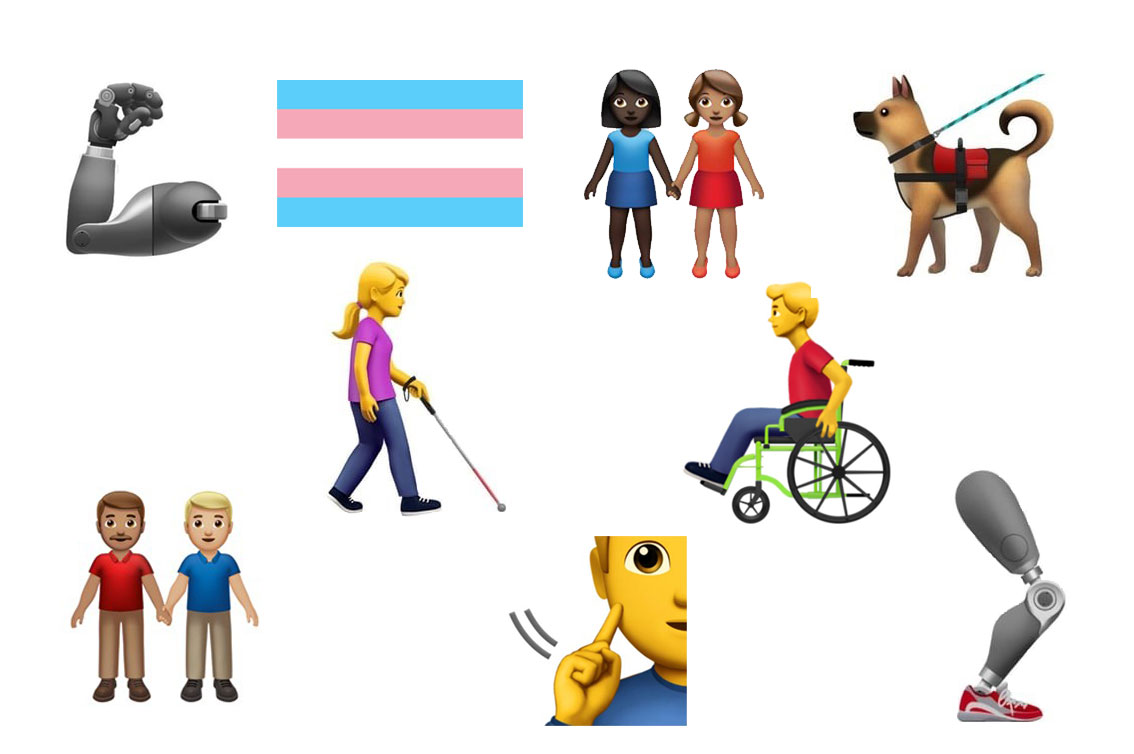 The numbers about emoji use are mindboggling: it is estimated that more than 700 million are used every day in Facebook posts alone. And the emoji real time tracker on Twitter flashes so fast it comes with an epilepsy warning. At cApStAn we have been exploring the potential of emoji as a developing language for some time and find this an interesting field of research. But emoji can of course mean very different things for different people. Recent releases of emoji by Unicode, for example, have signified a long asked-for improved representation for disability rights and LGBT communities.

In March 2019 Unicode released 59 new emoji (230 if you include modifiers), which included options for varying gender, skin and hair color as well as for people who use hearing devices, prosthetics, a white cane, guide dogs, service dogs, and wheelchairs. This release also included gender neutral couples, with mixed skin tones (skin-tone modifiers for other emoji had been available since 2015). Furthermore, on January 29th this year the transgender pride flag emoji was finally approved, after years of rejected proposals. Trans people had previously made use of the lobster emoji to represent themselves. Besides the transgender flag, the new release of emoji for 2020 will include some gender-neutral and gender-inclusive options for emoji that already exist. Emoji’s are therefore becoming an essential way for diverse communities to have visibility online, say the authors of “The illustrated history of Emojis”, released for World Emoji Day 2020 (July 17).

The new, more diverse and inclusive emoji can have an important educational role, says Meena Das, an activist from IN NextGen, a network of college students and recent graduates with disabilities. “If young people get accustomed to seeing such emojis on a daily basis, it subconsciously increases awareness about diversity in them,” she says. Das also says it will be an amazing feeling for people with disabilities to finally be represented in something that is used so commonly to express emotion.

Given their focus on representing diversity in gender, sexuality, ethnicity and culture, the new emoji certainly offer opportunities for new conversations, says Jennifer Fane, associate lecturer in health and early childhood education at the Flinders University (Australia). They may also provide opportunities for young children and indeed people of all ages to engage with and have access to a living language that is representative of them and inclusive of all in ways that words cannot always as easily offer.

Emoji use evolution with societal changes

Existing emoji are increasingly being used in association with important societal events. For example, following the death of George Floyd and subsequent Black Lives Matter protests against racism and police brutality, Emojipedia experienced a significant increase in lookups of the Raised Fist with Dark Skin Tone emoji. And it appears that the Black Heart emoji is increasingly being used as a symbol of solidarity and support for and amongst black communities.

Unicode has also been very quick to respond to the global Covid-19 pandemic. Emojipedia suggests sequences of emoji that can be used when talking about correct hygiene and social distancing measures. Examples include the soap, hands and water drop emojis to illustrate washing hands, a train, mask and shopping trolley combo to remind people to wear protective gear when in public, and two people either side of a double arrow to illustrate social distancing.

Emoji as a developing language

This is an interesting field of research that we have written about in the past, in particular with reference to the work carried out by Italian linguist Prof. Francesca Chiusaroli and her team, the first, to the best of our knowledge, to have developed an emoji grammar and glossary. This grammar was used to “translate” the book Pinocchio (the most translated non-fiction book in the world) from Italian to emoji and, in our view, represents a brilliant linguistic experiment (see our article titled “Emoji, a developing language?” at this link). In March 2018, Dictionary.com became the first major reference resource to include descriptive explanations for emoji, not suggesting that emoji are words, but instead giving insight into how certain emoji are used.

“How emojis can help children learn and communicate” Jennifer Fane, The Conversation, April 7, 2017 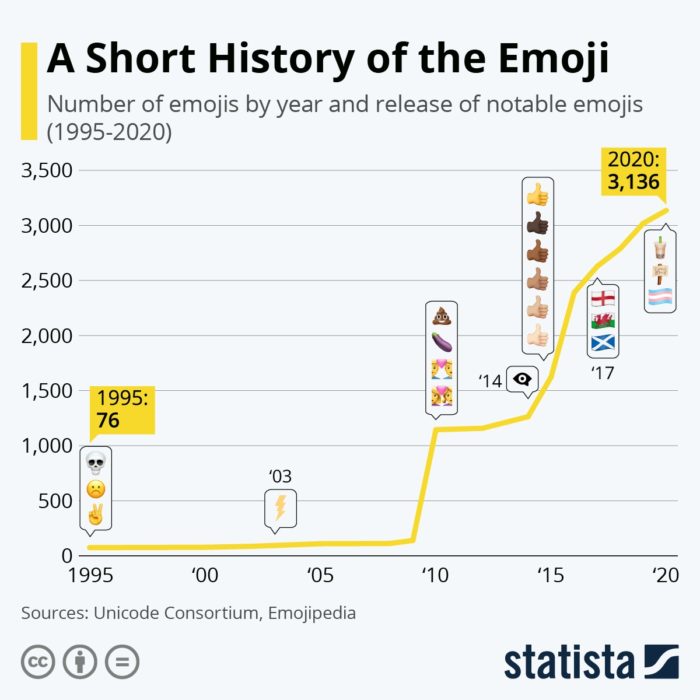