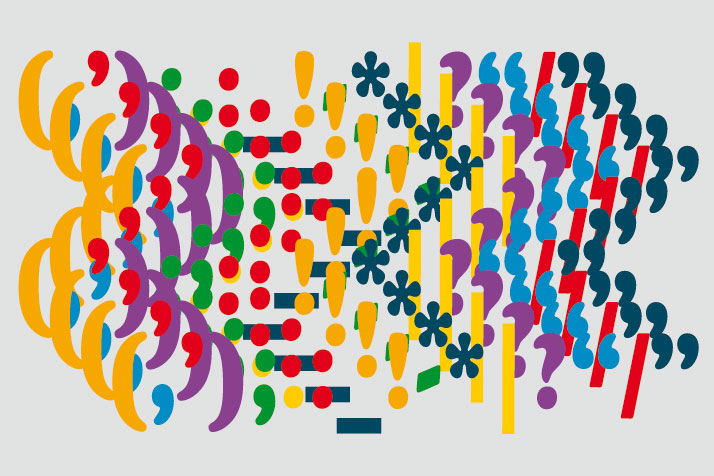 In the era of internet language punctuation is morphing into new shapes, acquiring new tasks, and new meanings

The age of online communication has brought about a radical reinvention of punctuation, in ways that transgress the boundaries of what is commonly defined as “good grammar”. This has sparked concerns about the future of formal language and become a hot topic of discussion. In “text speak”, three dots, or a question without a question mark, a dropped apostrophe, or a full stop, can become loaded with new meaning. Full stops, for example, can be seen as rude or denoting anger if used at the end of a text message; when used in between every word they can serve to drive a point home. Punctuation marks have taken on new shapes too: colons, dashes and brackets have been repurposed as emoticons to try to capture variations of happy and sad. Creative use of punctuation, social acronyms, abbreviations, emphatic capitals, expressive word lengthening, creative respellings, keysmashing, hashtags, emoji, are all innovative ways to convey nuances of tone and replace cues found in face-to-face conversations.

Is “formal language” about to undergo some radical shift?

To those who worry that formal language is under threat socio-linguist Gretchen McCullogh replies that internet language is a distinct genre, with its own goals, and to accomplish those goals successfully actually requires a subtly tuned awareness of the full spectrum of the language. According to academic and writer Florence Hazrat, author of different publications on punctuation, recent research shows that “textisms” do not deteriorate language skills, but boost them, provided they go hand in hand with “proper” grammar education. Hazrat is confident that, in spite of what it might look like on the surface, anybody who casts an eye over their text messaging will realise that punctuation “is very much not dead”. It changes, yes, she says, but it has always done that. The future will depend on the technology we use to write, and what we need, or want. Only. time. will. tell. of. course. 🙂

Why was punctuation invented?

Florence Hazrat gives an interesting overview of the history of punctuation in a recent article for Aeon. Writing without punctuation (or spaces) actually lasted for many hundreds of years. In classical times stone inscriptions and handwritten texts WOULDLOOKLIKETHIS. Writing was mostly a preparation for speech: any marks that were inserted served to indicate where to pause in delivery. The first punctuation marks appeared in the Late Antiquity and it is not until the the 7th century that the systematization of punctuation took place. This reflected a general shift in the perception of writing from a record of speech to a record of information. In speech, gestures and facial expressions add emotional charge to what is being said but what is perfectly clear in speech can become doubtful in its written form. The necessity to indicate “tone” in written texts is what drove the advent of punctuation.

Key milestones in the history of punctuation

In the 3rd century the scholar Aristophanes of Byzantium planted the first seeds for a system of punctuation. In the 7th century Irish churchman and encyclopaedist Isidore of Seville invented the period, comma and colon. By the end of the same century, Irish monks had also added spaces between words to his system of dots. The earliest form of the modern question mark dates back to the late 8th century. With the invention of the printing press in the 14th and 15th century a standard system of punctuation was needed: this in turn led to a boom of inventive punctuation, including the exclamation mark, brackets (or parentheses), and the semicolon. The apostrophe originated in the early 16th Century and by the 18th century the dash and ellipses has also made their appearance. Our modern system of punctuation emerged in the 19th century.

Controversies around the semicolon and the comma

Just quite when and how to use the semicolon puzzles us to this day and has given rise to “angry dismissals and offensive expletives”, says Hazrat. The 20th-century writer Kurt Vonnegut called them “transvestite hermaphrodites representing absolutely nothing” and the US author Edward Abbey a “storm of flyshit on the typescript”. The semicolon was not the only punctuation mark to arouse strong passions: in 1905, Moscow printers went on what is known as the “Comma strike” and  demanded to be paid also for setting punctuation marks, as these required the same amount of time as the alphabet. In more recent times there have been fiery discussions on social media about the serial, or “Oxford”, comma: there are hundreds of tweets with the hashtag #OxfordComma, and dedicated accounts include author Rick Mueller’s @CelebrityOxford, where he asks celebrities “where they stand on the Oxford comma” (almost 10k tweets), and @IAmOxfordComma (20 k followers). See our article on the Oxford comma at this link

“Punctuation is a deeply conservative club and it hardly ever admits a new member”, says author Mary Norris in her very entertaining “Confessions of a comma queen” – see our review of the book at this link. The English printer Henry Denham invented a mark denoting sarcasm (a mirrored question mark) in 1575, but it never caught on. Neither did the upside-down exclamation mark suggested by the English natural philosopher John Wilkins 1668, or the point d’ironie created in 1781 by French philosopher Jean-Jacques Rousseau. Other examples include the interrobang (a superimposition of question and exclamation mark) invented in 1962 by US advertising executive Martin Speckter, and the SarcMark, (short for “sarcasm mark”) a snailshell-like spiral created by Douglas Sak, which is registered as a trademark and is available for smart phones. More recently, interns at the creative agency BBH, US, have experimented with sartalics (reverse italics).

The demise of the apostrophe

Linguists warn that we may be losing the apostrophe. “In text land, apostrophes have become endangered species” says the author of an article for Wired. Why is this happening? Mary Norris says “it’s a pain” to switch screens from letters to symbols when texting; it cannot be used in urls and the GPS does not recognise it, a real issue with names of places. Increasingly companies and brands are also leaving them out (eg. the British bookseller Waterstones, the chemist Boots, and the media organisation Reuters). And apostrophe misuse is a generalised phenomenon. UK journalist John Richards, who founded the “Apostrophe Protection Society” in 2001, closed the Society last year lamenting the fact that despite his and his supporters’ best efforts, the “ignorance and laziness present in modern times have won”. See also our blog article “Is the apostrophe doomed to die?

Why punctuation is essential to disambiguate meaning in written English

In written English, punctuation is vital to disambiguate the meaning of sentences. For example: “eats shoots and leaves” (which means the subject consumes plant growths) and “eats, shoots, and leaves” (which means the subject eats first, then fires a weapon, and then leaves the scene) have completely different meanings. “Eats, shoots, and leaves” is also the title of a book by Lynne Truss, an English journalist, novelist, radio broadcaster and dramatist. In it the author describes her “zero- tolerance” approach to punctuation, mixing instruction and humour. The title comes from a joke in which a panda bear goes into a bar, asks for a sandwich, eats it, then takes out a revolver and fires it. When the barman asks him why, he throws a book on to the bar and growls: “This is a badly punctuated wildlife manual. Look me up.” The barman flicks through the book and, under the relevant entry, reads: “PANDA. Large, black-and-white, bear-like mammal native to China. Eats, shoots and leaves.”

Emily Dickinson most often punctuated her poems with dashes, rather than periods, commas, and other punctuation marks. She also capitalized random words, not just words at the beginning of a line. Charles Dickens is known for his weird use of commas, e.g.: “She brought me for a present, the most hideous Ostrich’s Egg ever laid”; “The first house to which they bent their steps, was situated in a terrace of respectable appearance”. Dickens’ commas “are a matter of historical record”, says Mary Norris, and they may have been intended “to give a lift to the voice (if only in the readers’ head) and inject a bit of suspense”. Hazrat recounts how Ernest Hemingway’s numerous full stops cut his prose into “repressed chiselled parcels of supposedly objective observations” and how James Joyce and Virginia Woolf manipulated the lack of punctuation as a representation of “the vagaries of thought”.

National Punctuation Day, held on September 24, was established to promote the correct usage of punctuation in the English language. Across the US, punctuation events test skill, educate and even poke fun at some of those embarrassing errors. The founder of the observance sends out a challenge every year.

“The Past and Future of Punctuation Marks”, Florence Hazrat, History Today, February 6, 2020

“The Birth of the Semicolon”, Cecilia Watson, the Paris Review, August 1, 2019