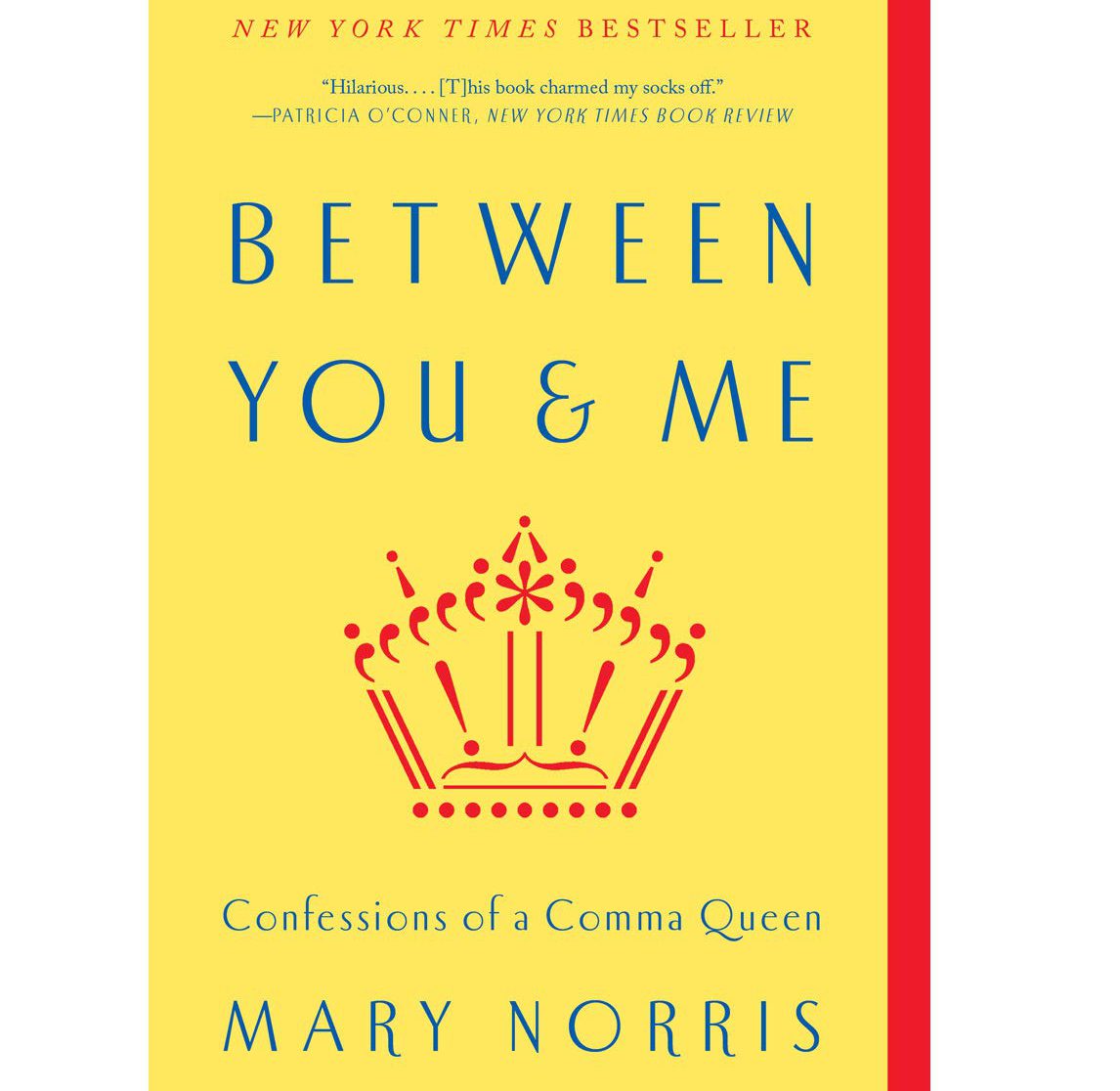 Not new, but just discovered, a very entertaining guide to English grammar by Mary Norris, who was copy editor at “The New Yorker” for 30 years (the book was first published in 2015). A passionate advocate for correct spelling (“a misspelling undermines your authority”!) she writes that spotting a spelling mistake, which had been missed by both a fact-checker and proof-reader before her, was actually what gave her her first break at the magazine. Spelling is the “clothing of words”, she writes, their outward visible sign, and “even those who favour sweat pants in their every day life like to make a bella figura, as the Italians say-a good impression-in their prose. She does, however, acknowledge the difficulties: “The English language is full of words that are just waiting to be misspelled”…

The book contains amusing descriptions of some of the most common issues in grammar: punctuation, “danglers,” who vs. whom, that vs. which, compound words, gender-neutral language. Examples of her inimitable style include statements such as: “Dashes, like table forks, come in different sizes, and there is proper use for each”; “There is no mark of punctuation so uppercrust as the semi-colon”; “A colon is a very controlling gesture. It says ‘Right this way’, like a proper butler”;  “Parentheses often act like giant commas, and commas like tiny parentheses”. Speaking of commas, there are different schools of thought about their use and even something as simple as the “serial comma”, the one before “and” in a series of three or more things, can arouse strong feelings, she says. Norris is in favour of it, as it prevents ambiguity, and says she uses it consistently, rather than decide on a case-by-case basis. The internet is full of examples which are absurd without the serial comma, she writes, citing a few: “We invited the strippers, JFK and Stalin”, or “This book is dedicated to my parents, Ayn Rand and God.” 🙂

The book also looks at how grammar has evolved over time. I guess not many people would know that the comma was first refined by a Venetian printer, circa 1490, and flourished during the Renaissance. And that the origin of the word apostrophe goes back to Greek drama but the “squiggle” comes to us from French. Changes in use of grammar are inevitable but not always for the best. Norris says we may be losing the  apostrophe, for example. Why? People are lazy, it’s a pain to switch screens from letters to symbols when texting and, perhaps more importantly, it cannot be used in urls (1) and the GPS does not recognise it, a real issue with names of places. Believe it or not in England there is such a thing as an “Apostrophe Protection Society”(2). Hyphens are also on the move, says Norris: most compounds start as two words, acquire a transitional hyphen, and then lose it becoming one word. “Today”, “ringtone”, and “deluxe”, are three such cases. (3)

In her long years at The New Yorker Norris had to learn how to deal with writers who take liberties with language (and grammar). “If you tinker with their work, taking it upon yourself to neutralize a slightly eccentric usage or zap a comma or sharpen the emphasis of something that the writer was deliberately keeping obscure, you are not helping”. In Norris’ experience, however, “really great writers enjoy the editorial experience” and “are not defensive”. She likes to remember how, when she spotted a a minor inconsistency in one of Philip Roth’s proofs, he wrote back to say: “Who is this woman? And will she come live with me?”

Some of the best stories in the book are about the quirks and foibles of some of the most famous authors of all times, for example Charles Dickens’ weird use of commas, e.g.: “She brought me for a present, the most hideous Ostrich’s Egg ever laid” (4); “The first house to which they bent their steps, was situated in a terrace of respectable appearance”. (5) Dickens’ commas “are a matter of historical record”, says Norris, and they may have been intended “to give a lift to the voice (if only in the readers’ head) and inject a bit of suspense”, but what we can learn from him is “not to abuse the comma by using it to separate the subject from the verb or the verb from the object.”

To conclude, it was interesting to read about the “interrobang”, a combined question mark and exclamation point (‽), invented by an adman in the US in the sixties, which, Norris says, “did not really catch on”. (6) “Punctuation is a deeply conservative club”, she adds. “It hardly ever admits a new member.”

A most enjoyable read.

1) The ampersand has the same problem with urls, see our article about the recent petition to reinstate it as the 27th letter of the alphabet @ https://www.capstan.be/the-rise-and-fall-of-the-ampersand/

2) The “Apostrophe Protection Society” was founded in 2001 “with the specific aim of preserving the correct use of this currently much abused punctuation mark in all forms of text written in the English language”. See https://www.apostrophe.org.uk/. F

3) Norris mentions a book called “Meet Mr. Hyphen (And Put HIm in His Place)”, by Edward N. Teall, possibly “the only full-length work on hyphens extant in English”.

4) Quote from a letter from 1856 by Charles Dickens