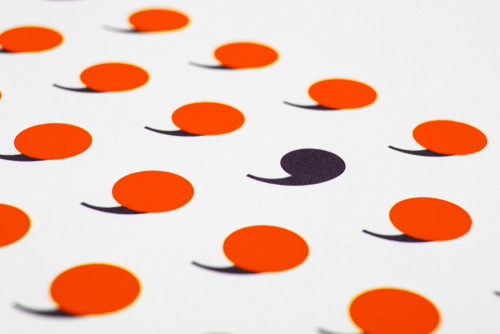 A very entertaining article about the “Oxford comma”, and why we recommend using it

The Oxford comma, also known as a “serial comma”, is used after the penultimate item in a list of three or more items, before “and” or “or”, and its presence or absence can significantly alter the meaning of a sentence. The example that is most frequently used is: We invited the strippers, JFK, and Stalin. Without the Oxford comma JFK and Stalin appear to be the names of the strippers. To avoid possible ambiguities, the serial comma is mandated by the style guides of many media outlets, including Quartz, where an article on this subject has recently been published. The more minimalistic view, adopted by, inter alia, The New York Times and Associated Press, finds the extra comma stuffy, and believes that the conjunction, coupled with context, should be sufficient to avoid confusion.

Examples of serious consequences of missing or extra commas abound. In 1872, an American tariff law including an unwanted comma cost taxpayers the equivalent of $40m today. Thomas Jefferson proposed removing two commas from the original text of the 2nd Amendment: these commas have fueled an ongoing fight over the founders’ original intent on the topic of gun ownership. More recently, in 2018, a dairy company in the US city of Portland, Maine settled a court case for $5m because of a missing comma.

There are a lot of “big feelings” around this small punctuation mark, says the author of the article, and very active and vocal “fans” also on social media. There are hundreds of tweets with the hashtag #OxfordComma and dedicated accounts include author Rick Mueller’s @CelebrityOxford, where he asks celebrities “where they stand on the Oxford comma” (almost 10.000 tweets and 1.300+ followers), and @IAmOxfordComma (20.000+ followers), which has as its mission “to resolve ambiguity.”

At cApStAn LQC, in our translatability assessment workshops for test authors we strongly advocate using the Oxford comma: punctuation is essential in order to disambiguate the source version of a survey question or test item – see also our article here.

See also: “The Oxford Comma Is Extremely Important And Everyone Should Be Using It”, Buzzfeed, January 15, 20\4