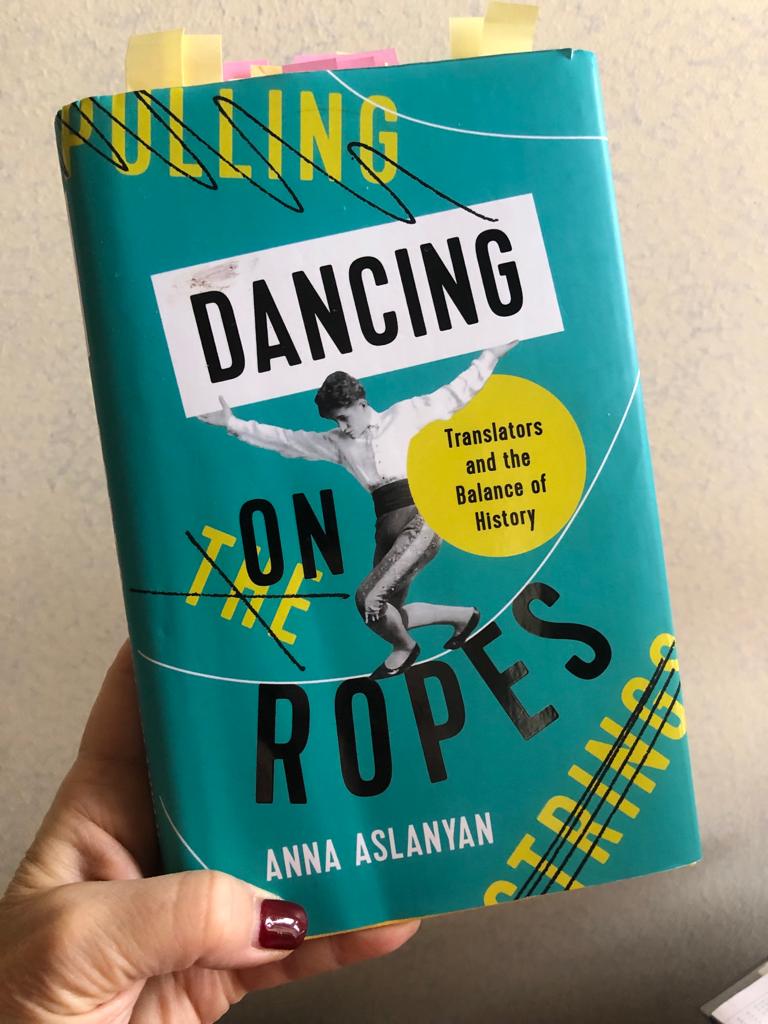 “Dancing on Ropes. Translators at the balance of history” by Anna Aslanyan: a review

The book “Dancing on ropes. Translators at the balance of history”, written by Anna Aslanyan, is based on the author’s experience as a Russian-English translator and service interpreter. Aslanyan grew up in Moscow and lives in London. She writes for a number of publications, including 3:AM Magazine, The Independent, The London Review of Books, and The Times Literary Supplement. Her translations into Russian include works of fiction by Mavis Gallant, Zadie Smith, Jonathan Lethem, Rod Liddle, and Ali Smith. “Dancing on Ropes”, published last year to excellent reviews, provides a detailed overview of the history of the profession and highlights the key role that translators and interpreters have played across history, and still play today. They have been, and continue to be, indispensable go-betweens in innumerable contexts, including cultural, social, political, diplomatic, legal and commercial. Over time translators have doubled as poets, slaves, doctors, apprentices, lawyers, spies, missionaries, diplomats, soldiers, and so on, Aslayan says. They have often worked in high risk settings and sometimes even lost their lives “in the linguistic line of duty”. The book discusses these and other challenges faced by translators as well as some of broader issues related to the profession, such as the debate around “foreignisation” versus “domestication” in literary translation and whether the translator should be “invisibile” or not. The final chapter analyses the advent of machine translation and its potential threat to translators. Aslanyan reassures us, paraphrasing Twain, “that the reports of the translator’s death have been greatly exaggerated”! What makes “Dancing on ropes” particularly enjoyable is that for each of the topics raised there are interesting and often amusing stories and anecdotes, drawn from past or recent history, to illustrate the points made.

Tipping the balance of events

Translators have always been present – and still are today – at the great events of history. Many have achieved a considerable degree of influence, Aslanyan says. The book provides numerous examples, which range from meetings of heads of state (US-USSR during the Cold War) and key historical negotiations (Munich agreement between Hitler, UK, France and Italy), to signing of peace treaties (Yalta Conference) and international trials (Nuremberg trial against Nazi war crimes). Translators have sometimes even contributed to altering the course of history. A (mis)translation issue has been indicated as one of the factors leading to the US declaration of war against Japan in 1945. “The act of translation itself emerges as a culture clash where infinite variations of meaning are capable of tipping the balance of events” Aslanyan writes. A translator’s choice of words can have immense consequences, she adds. “A figure dancing on a rope, with its joyful but also sinister connotation, is an apt image for the profession”. §

Translators and interpreters have often worked at the risk of their lives and had to deploy survival strategies such as “going native” to better blend in, using flattery, acting submissive, avoiding forceful statements, downplaying or omitting parts of discourse, says Aslanyan. Sometimes these efforts were of no avail: Stavrachi Aristarchi, the last member of a dynasty of “dragomans” – as translators were called in the Ottoman Empire – of Greek descent, was accused of high treason and executed in 1821. A similar fate befell Alexander Griboedev, Russian Ambassador to Persia, killed in 1829 in Teheran, Britain’s explorer, military office and diplomat Alexander Burnes, killed in Kabul in 1841, and many more. Frontline translators, in Afghanistan and other conflict zones, Aslanyan notes, are still risking their lives today. She commends the work of Red T, a nonprofit organization advocating for the protection of translators and interpreters in high-risk settings.

Languages themselves can represent a major challenge for translators and interpreters. Some are more difficult to translate than others, whether in writing or orally. Some people are easier to interpret than others. Dialects, humour, irony, slang, “false friends” (words that sound similar in different languages but mean different things) and idiomatic expressions all pose problems. And can give rise to mistranslation and misunderstandings. The book provides interesting examples of challenges in translating idioms (Khrushchev-Nixon talks during the Cold War, pages 8-10), jokes (translator Ivan Melkumjan and Italian Prime Minister Berlusconi, pages 22-6) and “false friends” (French President Emmanuel Macron’s gaffe with the Australian Prime Minister’s wife, page 50). Aslanyan says that “there are numerous ways for any translator to discredit themselves: silence and talk, initiative and passivity, sometimes a single word, omitted or used, are all fraught with pitfalls. The translator’s fidelity to their source, can also be constantly questioned, she adds. Indeed it is not uncommon for translators to be used as scapegoats. At the Nuremberg trials, for example, Hermann Göring would complain that interpreters had made a mistake or hadn’t made themselves clear.

“Alarming reports of institutionalised unprofessionalism can be heard on both sides of the Atlantic”, says Aslanyan. Translators lack legal protection for their work; we wrote about this in an article titled “Anyone who speaks more than one language can declare himself or herself a translator: a harsh reality” (see this link). Many translators and interpreters lament being underpaid. Budget cuts for public service translations in past years have led to strikes in many European countries and even among European Parliament staff. The work of translators often goes unnoticed but at the same time is always open to challenge. Stress and mental health issues are not uncommon. In some settings translation can also represent a psychological burden. Aslanyan recounts how listening and having to translate the horrors of the Nazi war crimes at the Nuremberg trials had a major psychological impact on interpreters. In more recent times, they find it challenging to translate when there are sensitive issues at stake, eg. torture, domestic abuse.

Keeping up with technology

Aslanyan makes the distinction between the profession of “translator”, where translation is “written”, and “interpreter”, where translation is “oral”. Interpretation can be “simultaneous” (an interpreter connected live via headphones, or from someone who whispers in your ear, aka “chuchotage”) or “consecutive” (the interpreter waits for the speaker to pause, generally after a few sentences, and reproduces what was said for the audience). In past decades, both translators and interpreters have had to learn how to use new technologies. A UN-style set up with interpreters wearing headsets in booths was first used in the Nuremberg trials in 1945. Recruiting and training interpreters proved to be quite a challenge. The Americans alone interviewed 400 candidates. Mock trials were held, with simultaneous translation of sample speeches, gradually increasing the speed. These efforts led to the trial being held in four languages (German, English, French and Russian) with thehelp of 36 interpreters. More recently, computer-assisted interpreting techniques are being developed and tested. Translators for their part, have had to learn to use IT, Computer Assisted Translation tools (CAT tools) and, in more recent times, machine translation (MT). Aslanyan speaks of the “mixed results” in MT use in the final chapter of the book and warns of the problem of translation quality, given also that the question of defining it is still open (see also final paragraph).

The book explores some of the broader issues in the profession, including the debates around “foreignisation” versus “domestication” in literary translation, and whether the translator should be “invisible” or not. On the latter Aslanyan points out that invisibility is a relative notion, defined by where you stand. “To make yourself invisible in translation you have to put a considerable amount of effort into it, which in itself can hardly go unnoticed.” Regarding the former Aslanyan explains that domestication stands for cultural adaptation, whereas to foreignise means to preserve exoticism. The book contains a delightful excerpt of a translation by British explorer and author Richard Burton of “The Book of the Thousand Nights”, where his characters wear turbands and bag breeches but also mantillas and bonnets, drink sherbet and eat scones, frequent bazaars and saloons, variously salute and salam each other. What is interesting about Burton’s text is his versatility, says Aslanyan: he wants the reader to see the East in its exotic splendour but also to be entertained, not inundated, with foreign paraphernalia. Aslanyan says she does not really see the logic of the dichotomy and suggests a middle ground solution. “Isn’t the task of the translator to create a hybrid of the two”? “Why turn translation into a one-way street if we can move in both directions, looking for a place where the author and reader can happily meet, both enriched by by their respective journeys?”

When a special bond develops between author and translator

There is an interesting chapter in the book about how a special bond has sometimes developed between an author and his translator. This is the case of Norman Thomas di Giovanni, a young American translator, who met Argentinian author Jose Luis Borges while he was lecturing at Harvard, and ended up moving to Buenos Aires to work with him. The relationship became so close, and Borges placed such trust on di Giovanni, that he would even go back to the original to make changes based on his suggestions. See also our article titled “When author and translator forge a partnership so close that their roles are mingled and merged” at this link

We very much enjoyed reading about the linguistic acrobatics of the “Oulipan” authors. The “Oulipo” group consisted of (mainly) French-speaking writers and mathematicians seeking to create works using constrained writing techniques. One such author, Georges Perec, is famous for his 300-page novel “La Disparition”, which does not contain a single “e”. All his translators imposed upon themselves the same or similar literary constraint, avoiding the most commonly used letter of the alphabet. See also our article about Georges Perec at this link

In the final chapter of the book Aslanyan examines in detail the advent of machine translation (MT) and its possible (negative) impact on the translation and interpretation profession. Despite much progress there are many things that MT still can’t get right, including pronouns, idioms and common sense. Long term prospects aside, says Aslanyan, we can be sure of one thing: the principal aim of computers in translation of any kind, written or oral, is to provide professionals with some help and to allow end users to decide how much human input is needed for a particular task. Indeed, she adds, the advent of the machine age has only brought the human nature of translation to the fore. “Until language is reduced to putting more or less right words in the right order; as long as people continue joking and swearing, praising and ironising, uttering and writing things they mean or not; while communication still involves all of the above and much else, we can safely say, to paraphrase Twain, that the reports of the translator’s death have been greatly exaggerated”.

1) The title of the book is inspired by 17th century English poet Dryden who wrote “it’s much like dancing on ropes with fettered legs,” in the introduction to his translation of Ovid’s Epistles.

“ Dancing on Ropes, by Anna Aslanyan – the magic of translation and our lost love of languages”, Robert Fox, Reaction, May 29, 2021  https://reaction.life/review-dancing-on-ropes-by-anna-aslanyan-the-magic-of-translation-and-our-lost-love-of-languages/

Treasures of the Tongue: An Excerpt from “Dancing on Ropes: Translators and the Balance of History”, Anna Aslanyan, LA Review of Books, May 20, 2021 https://www.lareviewofbooks.org/article/treasures-of-the-tongue-an-excerpt-from-dancing-on-ropes-translators-and-the-balance-of-history/

“To Put It Diplomatically… Dancing on Ropes: Translators and the Balance of History”, Bridget Kendall, Literary Review, May 2021 https://literaryreview.co.uk/to-put-it-diplomatically