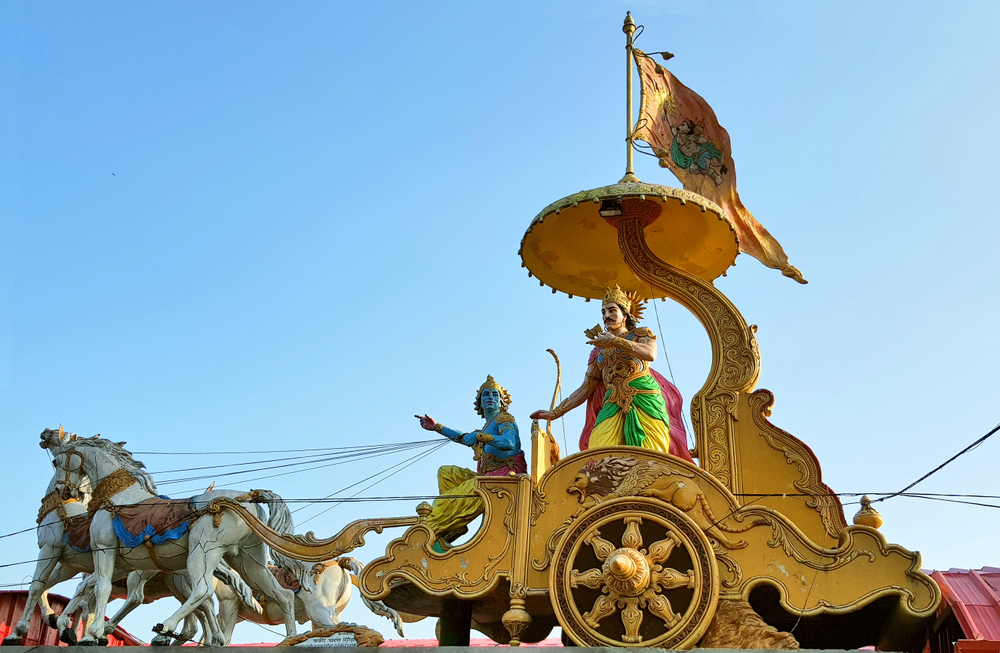 Hindu scholar and linguist Jeffrey Armstrong has spent the past 10 years translating and “decolonizing” the Bhagavad Gita, one of India’s most famous epic poems, written 5.000 (some say 7.000) years ago. His work was published this month with the title The Bhagavad Gita Comes Alive: A Radical Translation. The 701 verses of the Gita, written in Sanskrit, have been translated into English hundreds of times since the late 18th century. The poem recounts a dialogue between Arjuna, one of five Pandava princes, and the Hindu deity Krishna, who serves as Arjuna’s charioteer. The action of the Gita is set in the great Indian epic Mahabharata, which focuses on the interrelated families of the Pandavas and Kauravas and their struggle for control of the land of Bharat in India.

The Gita illustrates spiritual truths through its epic tale and touches on many different subjects, including self-knowledge, self-realization, discipline, sense of duty, the need to cultivate an attitude of non-attachment and detachment, reincarnation, devotion, the union of the individual with the Universe. Like all great works of literature, it can be read on many levels: metaphysical, moral, spiritual, and practical; hence its enduring appeal.

Armstrong says that the true meaning of the Gita is lost in Western translations. Christianity colonized the world and didn’t really take an interest in the cultures it wanted to take things from, he says. Christianity and colonialism are closely linked, as Protestantism and Catholicism were the state religions of the European colonial powers. Armstrong claims every English version of the Gita has the same Christian terminology: Lord, God, sin, angels, devils, soul, heaven, concepts that do not exist in Sanskrit or in Indian cultures and are totally foreign to the Gita’s world view

We found some details of Armstrong’s approach to the translation in the foreword of the book, written by Prof. Nilesh N. Oak, of the Institute of Advanced Sciences in Dartmouth, MA. Prof. Oak says Armstrong’s translation focuses on conveying the essential, innate and root meaning of each verse of the Gita. He has removed all the misleading English words of previous translations and identified, corrected and removed all “colonial” terms.

Oak also says that Armstrong made the careful choice to keep many of the original Sanskrit words within the English verse, where he felt that an English equivalent would only distort the Sanskrit meaning, or do more harm. Where necessary, he has inserted short English definitions within the verse, but for non-translatable or deeply nuanced words, he has provided in-depth definitions in a glossary.

References to the Gita in Western culture

One can find references to the Gita in some of the most famous works of American literature and philosophy, including Ralph Waldo Emerson’s poem “Brahma”, T.S. Eliot’s Four Quartets, and works by Henry David Thoreau, as well as in pop culture, e.g. songs by the Beatles. Dr. Jeffery D. Long, Professor of Religion and Asian Studies at Elizabethtown College, PA, claims that the Gita has had a profound influence also on George Lucas, the creator of “Star Wars”. “In the case of Lucas”, he says, “it is subtle, and must be teased out of a close viewing (or better yet, multiple viewings) of his films: the teachings of Yoda; the theme of detachment that runs throughout the tragic story of the rise, fall, and redemption of Anakin Skywalker; and so on”.

Long quotes one particular “Gita moment” in the Star Wars saga. The Gita, he says, is a dialogue which takes place whilst the events of the larger epic fade into the background, and the focus becomes the spiritual path. Likewise, he says, the most profound dialogue between Luke and Yoda occurs as Luke’s Starfighter sinks fully into the waters of the swamp, as the war between the rebellion and the empire rages in the space beyond.  Here Yoda challenges Luke to see well beyond our normal concepts of space, time, and causation. An interesting take, no doubt!

What about “male colonisation” in translation?

We venture to draw a parallel between what Armstrong calls the “Christian colonization” of works in translation, as in the Gita, and different forms of “male-culture-oriented colonization” of translated literature. To illustrate this concept we take the example of two epic poems recently retranslated by women scholars: the first is the Old English epic poem Beowulf (by Maria Dahvana Headley); the second is the Greek classic The Odyssey (by Emily Wilson).

In her translation of Beowulf, a very “testosterone-drenched narrative”, Headley says she worked to shine a light on the motivations, actions, and desires of the poem’s female characters, as well as to clarify their identities. The translation “makes interventions in the text to grant space to its women, and a chance at agency and grace”, in a way that previous translations had not allowed, thus restoring it to its original intent.

In The Odyssey, Wilson also “scraped away the barnacle layers of centuries of masculine readings” to restore a less judgmental and more gender neutral version, more faithful to the original. Wilson says there is nothing in Homer to correspond to the “modern pseudo-moral judgments” of previous translations and that this is a clear case where “modern bias has been projected back onto antiquity”. See some concrete examples from both these works in our articles on the topic, at this link for Beowulf, and here for The Odyssey

Jeffrey Armstrong is Founder of VASA Vedic Academy of Sciences & Arts, International Speaker, Best-selling Author, Vedic Scholar, Linguist and Poet. His passion for the Sanskrit language began 50 years ago when he was a young university student practicing yoga. Read more about him at this link