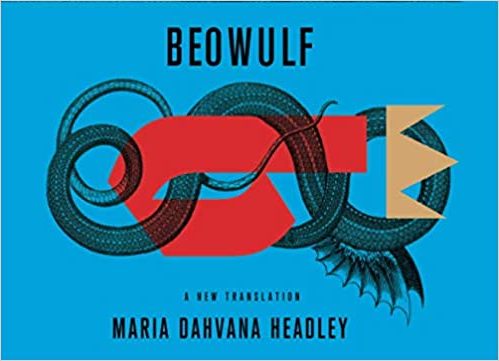 How far should we modernise language in literary translation? The case of the epic poem Beowulf

Emily Wilson’s 2017 English translation of The Odyssey raised quite a stir for its its audacious use of contemporary language and her gender neutral approach (see our blog article on this topic) but the new English version of the epic poem Beowulf takes modernisation of language in literary translation to a whole new level. From the very first line which reads “Bro! Tell me we still know how to speak of kings!”, to the very last, translator Maria Dahvana Headley has “gobbled from every corner of the language”, as she herself explains, to produce a version that is rich in slang, text speak, idiomatic expressions, hashtags and obscenities. Not only is her Beowulf innovative in the choice of language but she has also worked “to shine a light on the motivations, actions, and desires of the poem’s female characters, as well as to clarify their identities”. It is a decidedly feminist interpretation of this most “testosterone-drenched narrative”, says Miles Klee, writing for MEL Magazine, much as Emily Wilson’s was for The Odyssey, we add. In an interview for Slate Headley says her goal was to broaden and diversify the audience, that has been pushed out by “ivory tower” translators over the years. She is also hoping to reach out to readers who are interested in looking at masculinity from a different angle. And, ultimately, she is thinking about the storytelling techniques “that we need to be using and developing in order to create a more generous society–because the hero-monster society is not a generous society. It’s inherently not”

Beowulf was written in Old English between the mid-seventh and the end of the tenth centuries, and there remains only one manuscript copy, the Nowell Codex. It has been reworked for centuries, says Headley, so that one could say that it has been written almost as much by translators and librarians as it was by the original poet(s) and scribes. In the introduction to her translation Headley talks about the level to which a translated text should be “archaized” to emphasize for modern readers the alien landscape of early English verse, and specifically to what degree translators should mimic the poet’s own choice to use words already archaic and poetic at the time of the poem’s composition. “There are plenty of crinolined “forsooth” and “ween” ridden translations to choose from, should the reader be so inclined, as well as a series of Scots-tinged selections”, she says, but poetic voice and communicative clarity were her specific interests.

Headley explains that her diction “reflects access to the entirety of the English word-hoard”. Some of these words are legitimately archaic or underknown (“corse,” “sere,” “sclerite”), others have been recently written into lexicons of slang, or thrown up by new cultural contexts (“swole,” “stan,” “hashtag: blessed”), and already fading into, if not obscurity, uncertain status. “Language is a living thing”, says Headley, “and when it dies, it leaves bones. I dropped some fossils here, next to some newborns. I’m as interested in contemporary idiom and slang as I am in the archaic. There are other translations if you’re looking for the language of courtly romance and knights. This one has “life-tilt” and “he rode hard” and “he stayed thirsty” in it.

Looking at how Emily Wilson, translator of The Odyssey, addressed the issue of modernisation, she made the point that all modern translation of ancient texts exist in a time, a place, and a language that are entirely alien from those of the original. “All modern translations are equally modern”, Wilson says. The question facing translators and their readers is whether to try to disguise this fact, through stylistic tricks such as archaism and an elevated, artificially ‘literary’ register, or to underline it, and thereby encourage readers to be aware that the text exists in two different temporal and spatial moments at once.”

A feminist’s approach to the female characters

In her translation of Beowulf Headley says she worked to shine a light on the motivations, actions, and desires of the poem’s female characters, as well as to clarify their identities. “The translation makes interventions in the text to grant space to its women, and a chance at agency and grace, in a way that neither Tolkien’s nor Heaney’s translations allowed, reads an article in the Ancillary Review of Books. Grendel’s mother, for example, is almost always depicted in translation as a monster. In reality Grendel’s mother is referred to as “ides, aglaec-wif,” which means “formidable noblewoman.” She isn’t physically described, beyond that she looks like a woman, and is tall. The Old English word for fingers, fingrum, has frequently been translated as “claws,” but Grendel’s mother fights with a knife, and wielding a knife while also possessing long nails is, as anyone who’s ever had a manicure knows, a near impossibility, she adds. The word brimwylf, or “sea-wolf,” is also used as a supporting argument for her monstrosity, but the manuscript itself reads brimwyl, so it’s very possible that scribal error introduced a wolf where a wife should be, and that traditions of gendered hierarchy made a monster of a mother!

In The Odyssey, Wilson also “scraped away the barnacle layers of centuries of masculine readings” — as a review in The Guardian reads — to restore a less judgmental and more gender neutral version. Some examples? Her Telemachus says that the slave women “lay beside the suitors.” In previous translations the slaves had been called “sluts” or “whores.” She also says she doesn’t make the goddess Calypso seem ridiculous, whereas most male translators present her as a laughable, hysterical, absurd “nymph”. “The Greek doesn’t do this, and nor do I”. Wilson says there is nothing in Homer to correspond to these “modern pseudo-moral judgments” and that this is a clear case where “modern bias has been projected back onto antiquity”.

Why retranslations are needed and important

Headley ends the introduction to her Beowulf by saying that there are other stories that haven’t yet been reckoned with, stories hidden within the stories we think we know. “It takes new readers, writers, and scholars to find them, people whose experiences, identities, and intellects span the full spectrum of humanity, not just a slice of it”. That is, in her opinion, the reason to keep analyzing texts like Beowulf. “We might, if we analyzed our own long-standing stories, use them to translate ourselves into a society in which hero making doesn’t require monster killing, border closing, and hoard clinging, but instead requires a more challenging task: taking responsibility for one another”.

The Ancillary Review of Books says that the poem is not fully successful because it doesn’t seem to know what to invest in: the “dudebro narrator in a bar” or its underlying feminist purpose; its modern global contexts or the fact that these still entail a specificity of race, culture, and language use. Jahn Sheehan, writing for NPR says he loves it for exactly what it is: “a psychotic song of gold and blood, stylish as hell, nasty and brutish and funny all at once, mad and bad and sad and alive now in a way that these words simply haven’t been for more than a thousand years”. Miles Klee, in an article for MEL magazine says the book is a lot of fun to examine and debate, simply because it pulls Beowulf into the fraught discourse on masculinity in the 21st century. And it raises a question about heroic narrative: Are legendary warriors a bunch of stupid jocks?

Excerpts from the Introduction to Maira Davahan’s Beowulf

“Whose “Bro” Is It Anyway? Review of Beowulf: A New Translation by Maria Dahvana Headley”, Samira Nadkarni Ancillary Review of Books, November 4, 2020