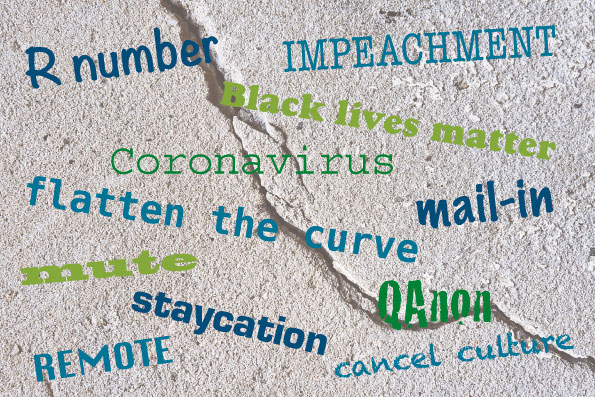 2020: A year of seismic shifts in terms of language usage and rise of new words

It’s that time of the year again when dictionaries announce their selection of top trending words. “Words of the Year” (WotY) are supported by usage statistics and typically reflect societal attitudes and concerns. The tradition dates back to 1971, with the German Wort des Jahres, and the American Dialect Society’s WotY is the oldest English-language version (1998). Hardly surprisingly, given the huge global impact of the COVID-19 pandemic, the Collins dictionary has selected the word “lockdown” as its 2020 WotY and the Cambridge dictionary’s choice is “quarantine”. An analysis of a corpus of 4.5 bn Collins’ data, found in web-based news, blogs and other text sources, revealed that this word registered a 6,000% increase in its usage in the current year. In 2019, there were 4,000 recorded instances of lockdown being used; in 2020, this had soared to more than a quarter of a million.

The Oxford English Dictionary (OED) has broken with tradition by announcing that “this was not a year that could neatly be accommodated in one single WotY”. Tracking a corpus of over 11bn words, its lexicographers have decided to report more expansively on the phenomenal breadth of language change and development over the year in a “Words of an Unprecedented Year” report. And, for the first time ever, the OED is organising a live interactive online session on December 10, at 5:00 PM CET, where they will present their evidence-based approach to monitoring language and this year’s particular challenge of keeping track of language developments. This session is intended for an audience of linguists, lexicographers, sociolinguists, language technologists, and word enthusiasts, and promises to be extremely interesting. This is the link for registration.

The OED report concludes by highlighting the key role language has played in the past year: “From the sobering discourse of pandemics and politics, to the light-hearted neologisms that have emerged in times of darkness, language is the common thread connecting these shared experiences across the globe.”

We now look forward to seeing if and how other dictionaries, such as the Merriam-Webster, Macquarie and American Dialect Society, will choose their 2020 WotY.

One of the year’s most remarkable linguistic developments, according to the OED, has been the extent to which scientific terms have entered general discourse. “We have all become armchair epidemiologists, with most of us now familiar with the term “R number”, says the author of a recent article in The Guardian. By March this year “coronavirus” was one of the most frequently used nouns in the English language. Other terms that have become much more common in everyday discourse include “flatten the curve” and “community transmission”.

What was also unprecedented this year, reads the OED report, was the hyper-speed at which the English-speaking world amassed a new collective vocabulary relating to the coronavirus, and how quickly it became, in many instances, a core part of the language. See also our article on the new “coronaspeak” at this link.

The major changes in working habits also affected the language, with both “remote” and “remotely” seeing more than 300% growth in use since March. “On mute” and “unmute” have seen 500% rises since March, while the portmanteaus “workation” and “staycation” increased by 500% and 380% respectively.

Other news events have also been reflected in language. In the early months of 2020, there were peaks in usage of “impeachment” and “acquittal”, and “mail-in” has seen an increase of 3,000%. Use of “Black Lives Matter” and “BLM” also surged, as did the term “QAnon”, up by 5,716% on last year. The phrase “conspiracy theory”, meanwhile, has almost doubled in usage between October 2019 and October 2020. Another term that features in the OED selection is “cancel culture”: we have recently written about this on our blog and the article is available at this link.

Words selected over the last years have been increasingly political. Where words such as “geek”, “photobomb” and “binge-watching” were once defining new vocabulary, more recent selections include “Brexit” and “fake news”. Helen Newstead, Collins’ language content consultant, says that “it seems an age since we had more light-hearted WotY … the politically charged atmosphere of recent years is clearly driving our language, bringing new words to the fore and giving new meanings and nuance to older ones. Indeed, if one thinks that the 2015 WotY for the Oxford Dictionary was the emoji “Face With Tears of Joy”! As an aside, the use of “Brexit”, which was Collins’ WotY 2016, has dropped by 80% this year. Amal Rajan, media editor at the BBC, comments that the news cycle can be a fickle friend, and sometimes not even a friend. “That usage of Brexit should be down by 80% even as we enter its most critical phase shows that, sadly, the limited bandwidth of news programmes and human attention can harm priorities. Isn’t now exactly the moment when we should be using Brexit more than ever?”

In the years 2019 and 2018 the WotY reflected mainly worlwide concern with environment-related issues. In 2019 the Oxford Dictionary named “climate emergency” as its WotY, the Collins Dictionary “climate strike” and the Cambridge Dictionary “upcycling” — defined as the activity of making new furniture, objects, etc. out of old or used things or waste material. Other words on the shortlists of the main dictionaries also referenced worries about the environment and climate change. These include “rewilding”, the practice of returning areas of land to a wild state, “carbon sink”, an area of forest that is large enough to absorb large amounts of carbon dioxide from the earth’s atmosphere and therefore to reduce the effect of global warming; “compostable”, something that can be used as compost when it decays, and “preservation”, the act of preventing something from being damaged. In Germany the 2018 WoTY was “heisszeit”, defined as “hot time/heat age”, or “hothouse Earth”, a clear reference to the 2018 European heat wave and to climate change. “Single-use” was also the 2018 People’s Choice for the Macquarie Dictionary (Australian English). The OED reports that, as the year 2020 progressed there were signs that attention was turning back towards the climate crisis. See also our article on the 2019 WotY at this link.

The OED report contains an interesting section on “World Englishes”. It reports that local responses to the pandemic have led to a number of other coinages, in different varieties of English. In the Philippines, frontline workers are called “frontliners”, while Filipinos from other regions stranded in a locked-down Manila are referred to as “LSIs”, short for “locally stranded individuals”; in Singapore, a person who needs to self-isolate is issued an “SHN” or “stay-home notice”; while in India those who wish to cross internal borders need to have an “e-pass”, an official government document authorizing a person’s movement during quarantine. In Australia, people help contain the spread of coronavirus by regularly using “sanny” (hand sanitizer), while in West Africa, people wash their hands using the “Veronica bucket”, a type of sanitation equipment composed of a covered bucket with a tap fixed at the bottom and a bowl fitted below it to collect wastewater, named after its Ghanaian inventor, Veronica Bekoe.

In Germany, an Unwort des Jahres (Un-word of the Year or No-no Word of the Year) has been nominated since 1991, for a word or phrase in public speech deemed insulting or socially inappropriate (such as “Überfremdung”, “over-foreignization”, referring to an excess of immigration). There is even an Un-word of the Century, it is “Menschenmaterial”: with this word, a human is considered a mere object. Similar selections are made each year since 1999 in Austria, 2002 in Liechtenstein, and 2003 in Switzerland.

In Japan, the Kanji of the Year has been selected since 1995. Kanji are adopted Chinese characters in Japanese language. Japan also runs an annual WY contest called “U-Can New and Trendy Word Grand Prix.” In 2011, following the Fukushima nuclear power plant disaster, the (frustratingly) enigmatic phrase used by Japanese officials before the explosion concerning a possibility of meltdown (“the possibility of recriticality is not zero”) (Sairinkai no kanōsei zero de wa nai) – became WotY.

In the US the American Society of Dialects has special categories for, inter alia:

– the Most Unnecessary WotY (recent examples include “manbun”, man’s hair pulled up in a bun, and “baeless”, lacking a romantic partner)

– the Least Likely to Succeed WotY (e.g “sitbit”, a device that rewards sedentary lifestyle – a word play on the Fitbit fitness tracker)

The Doublespeak Award is an “ironic tribute to public speakers who have perpetuated language that is grossly deceptive, evasive, euphemistic, confusing, or self-centered”, i.e. those who have engaged in doublespeak. It has been issued by the National Council of Teachers of English since 1974.

We particularly enjoyed these WotY related to the use of modern technologies (all are from the Macquarie Dictionary):

– “Phantom vibration syndrome” or “phantom ringing syndrome”: the perception that one’s mobile phone is vibrating or ringing when it is not; “ringxiety” (a portmanteau of ring and anxiety); “fauxcellarm” (“faux” = “fake” + “cellphone” + “alarm”), and “phonetom” (“phone” + “phantom”).

– “Password fatigue”: the feeling experienced by people who are required to remember an excessive number of passwords as part of their daily routine