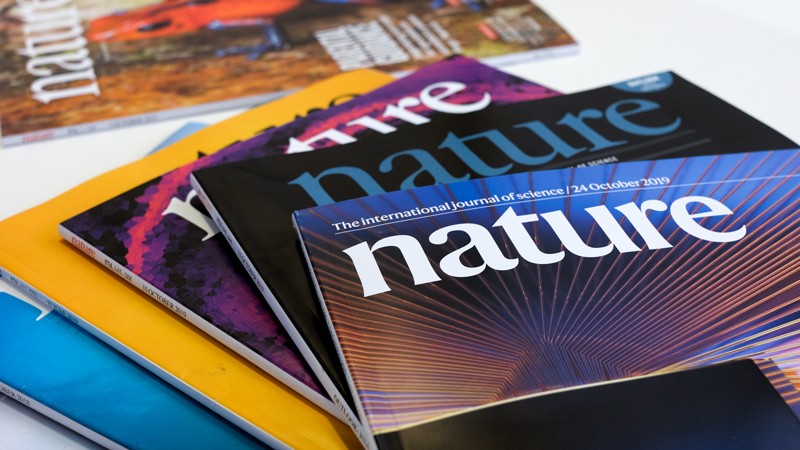 Today, more than 90% of the indexed articles in the natural sciences are published in English. That wasn’t always the case

For centuries science has been a polyglot enterprise, conducted in a number of languages whose importance waxed and waned in popularity over time, depending on politics, war, economics, and institutions, says Michael D. Gordin, Professor of History of Science at Princeton University. Latin was the dominant language in medieval times and during the Renaissance but gradually faded out; in the 19th century science in Europe was split fairly equally between English, French and German. In the 20th century, by the 1970s, about 70% of world publication in science was in English and about 25% in Russian (all other languages combined made up about 5%). Today, more than 90% of the indexed articles in the natural sciences are published in English. No matter which languages you know, if you want your work seen, studied, and cited, you need to publish in English. But history shows that this won’t necessarily always be the case. Could things still change? A recent article by US physicist and writer Meredith Fore in the online science magazine Symmetry tells us more.

From Greek and Latin to Romance and Anglo-saxon

Egyptian philosophers wrote stories in hieroglyphs; Aristotle and Plato wrote books in Greek, which were then translated into Arabic by their followers. Then came the Romans, writing in Latin. Many ancient scientific texts in Greek were rediscovered in Western Europe during the Renaissance and were translated into the language that most educated Europeans knew: Latin. This led to a resurgence of written Latin, despite the fact that all its native speakers had vanished for a millenium. In the 16th and 17th centuries, Galileo published in in Italian, but still translated his work into Latin, to take it to a wider audience. Gradually Latin faded out completely. By the mid-1800s, science in Europe was split fairly equally between English, French and German. Most researchers would have at least passive knowledge of all three and it was very common, for example, to have correspondence between scientists where one wrote in English and the other replied in German.

How German lost its lead to English

Germany was the dominant language in 1900 but its position in the scientific community declined with WW I and, even more so, with WW II. Under Nazi rule foreign students and researchers were denied visas; thousands of scientists were forced to resign from their universities or leave, and academics were forbidden from traveling abroad. These events led to a shift away from Germany, and from war-torn France as well. This was the time when there was a prominence of physics in the West, linked to the development of the Manhattan Project (§). It was also a turning point for the US in in terms of scientific education. The US was able to fund scientific conferences and the educational system, as it had more money that other countries after the war. The American educational system became very prominent, and later on also the British, so that English became the common conference language.

There was a strong scientific community also in the Soviet Union. Right after World War II, the Soviet government shut down the few scientific journals published in languages other than Russian. In decades after the war about 25% of world science publications were published in Russian. These were the years of the Cold War and it was important for Western scientists to know what Soviet scientists were doing, but they didn’t have enough people who knew Russian. The US Atomic Energy Commission, the Office of Naval Research and the National Science Foundation began to fund projects translating Soviet physics journals from Russian into English. These projects were also an important factor in English becoming overwhelmingly dominant. Western scientists no longer needed to learn Russian.

Things could still change, says Gordin, but it would take a major shock, like a global war, or radical climate effects, or a pandemic, to disrupt the system so much as to displace English as the dominant science language. And even if all native Anglophones were to vanish, if you wanted to learn any science, you would still need to know English, he says. “That’s why Latin lasted so long after the Protestant Reformation: it was so important for the repository of knowledge that it had to be kept alive.” What of Chinese, Hindi, Swahili or even Spanish? Where might we expect them to figure in future? Only time will tell.

(§) The Manhattan Project was a research and development undertaking during World War II that produced the first nuclear weapons. It was led by the United States with the support of the K (which initiated the original Tube Alloys and Canada.

Born in New Jersey, Gordin studied at Harvard University with a Bachelor’s degree in 1996 and a doctorate in 2001. From 2003 he was at Princeton University, where he is now a professor. He has done research on the early development of the natural sciences in Russia in the 18th century, biological warfare in the Soviet Union, the relationship of Russian literature to the natural sciences, early history of the atomic bombs and the Cold War, Albert Einstein in Prague, and the history of the periodic table. He is the author, inter alia, of “Scientific Babel: How Science Was Done Before and After Global English”, University of Chicago Press, 2015, on which this article is based. Gordin is present on Twitter at @GordinMichael