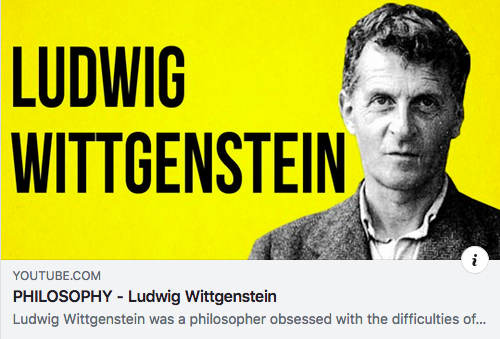 Much has been said and written about Ludwig Wittgenstein and his theory of language, but the video narrated by British philosopher and author Alain de Botton provides a fresh and playful take on his complex background, life, philosophy, and vision of language. The narrator says Wittgenstein’s view of how we manage to communicate ideas to each other – which was revolutionary for his times – is that language works by triggering pictures in our minds of how things are in the world. Words enable us to make these pictures and people are constanty “swapping” pictures with each other when they communicate. Problems arise when we are not clear of what things mean in our own heads, which is why self-understanding is essential, or when we read more meaning in words than was originally intended. His Tractatus Logico Philosphicus is a plea to speak more carefully and less impusively, says de Botton.

In later years Wittgenstein moved away from the picture language theory and, in his Philosophical Investigations (published posthumously), he argued that words are tools that we use to play different “games”, not intended, of course, in a literal sense, but more as “patterns of intention”. A statement such as “you never help me around the house” is not a request for concrete examples of help provided – i.e. a “stating the facts game” – but is a “confort and reassurance seeking game”. Working out which kind of game the other is involved in is key to good communication, says De Botton. Our understanding of ourselves depends on the words of others, on languages that have developed publically and communally over many centuries, before we were born. Words are in some way, therefore, “public tools for the understanding of private life.”

The video is part of The School of Life‘s series on philosophy, which Alain de Botton is founder of. It has had over 1.6 m views. The series also includes videos about Jean-Paul Sartre, Jacques Derrida, Michel Foucault, and more. Enjoy!

See also our article titled “Google Translate as a manifestation of Wittgenstein’s theory of language” , where artificial intelligence experts make the case for a close connection between AI and philosophy of language

Ludwig Wittgenstein (1889-1951) is considered one of the most influential figures of the 20th century. His Tractatus Logico Philosophicus (1921) and Philosophical Investigations (1953) were major contributions to the philosophy of language.