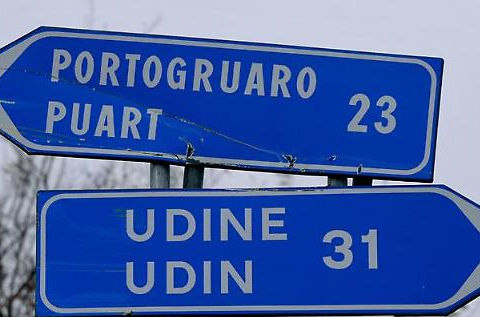 In the framework of an international assessment study, PISA, some years ago I was asked to verify the Italian version of the Home Questionnaire, aimed at collecting background information about the parents of the tested students. One of the questions asked which language(s) and/or dialect(s) were spoken at home among the family members. To my surprise, in the Italian version “Friulan” was enumerated in brackets as an example of dialect.

Friuli is an autonomous region in north-eastern Italy. I know this region quite well as both my parents come from Friuli and I frequently visit family members living there. I am therefore very well acquainted with “Friulan” which I can speak quite fluently, while my reading and writing skills are unfortunately rather limited.So, why was I surprised to see Friulan in the list of dialects? Although probably considered by the vast majority of Italians who have never visited the region as a dialect, academic literature has awarded Friulan the status of language.

But what makes Friulan a language? I will not go into the academic distinction between dialect and language. This has been debated in a number of works and publications which point at several criteria to differentiate between the two.

Beyond academic debate, what is the “field experience”?

How is Friulan perceived by an Italian from another region when visiting this region? And how is Italian perceived by a Friulan welcoming a person from another region? Can this perception prove that Friulan is a language? Let’s imagine that we go to this region and we need to buy something. As soon as we enter a shop, we receive a welcoming Friulan greeting “bundì”. At our corresponding reply with the Italian “buongiorno” (“good morning”), the shopkeeper will probably raise his/her eyebrows, recognise us as a “foreigner” (yes, even if you are Italian, the word for someone not living in Friuli is “forest”, i.e. “foreigner”) and make an effort to switch to Italian which is clearly not his/her “marilenghe” (Friulan for “mother-tongue”).

The conversation might then continue on some slippery ground, with the shopkeeper struggling to find the exact words in Italian and stumbling at times in false friends (there are quite a few!) and we, the client, trying to figure out from our conversation if we can come out of the shop with what we intended to buy.

Use of Friulan in informal and formal language contexts

This experience is already surprising – how comes that Friulan is commonly used in shops? Italian IS the “official” language of education, while Friulan is not part of the compulsory curriculum, although I believe it can be chosen as an option. Yet, Friulan is so widely spoken at all ages that oral communication naturally happens in this language. One could argue that this is limited to informal environments (although the shop experience can certainly be considered more formal than a casual conversation among family members or friends).

However, another recent episode in that region convinced me – if it were necessary – that this language is used at all levels. I had an appointment at a local notary’s office to sign a sales contract. I was reassured to see that the contract was in Italian. However, when the notary read it aloud to both parties, he stopped now and again to clarify certain sections … in Friulan. The other party was more than happy to have the contract explained in his language. For me it was linguistically interesting to see how Friulan is used even at a higher, more formal, level of communication. As for my husband, sitting next to me and not much acquainted with Friulan, it was like an experience abroad!

Bilingualism as implemented in Friuli

The degree of endorsement for this language is also clearly shown in the road signs, where the names of villages and towns are given in both languages. This may also be the case in other regions where there is a strong political movement towards independentism and dialect is pushed forward as a means of auto-determination. However, apart from bilingual Valle d’Aosta and Trentino Alto Adige, I’m not sure there is any other region in Italy where signboards used to indicate offices or services in institutions such as hospitals and public places are bilingual.

To go back to my initial question: what makes a language a language? I think that the “perception” of both the speakers and the non-speakers adds a criterium for the definition of a language. It may be difficult to measure or prove and it cannot be considered as the only characterising factor, but it is certainly a dimension that needs to be taken into account.

PISA is the “Programme for International Student Assessment”, a worldwide study by the Organisation for Economic Co-operation and Development (OECD) in member and non-member nations intended to evaluate educational systems by measuring 15-year-old school pupils’ scholastic performance on mathematics, science, and reading. PISA 2018 is the seventh PISA cycle in which cApStAn was commissioned with maximising cross-language and cross-country comparability – we started our collaboration with PISA in 2000. For the PISA 2018 programme we verified 106 translated or adapted versions of the survey instruments. We are also proud to have been asked to verify the translations – with a view to maximizing comparability across language versions also of the ICILS data collection instruments. We have had the privilege of working with IEA for 19 years, including on other flagship projects such as TIMSS, Trends in International Mathematics and Science Study and PIRLS, Progress in International Reading Literacy Study.

Do you want more information about us? Check out the following resources: