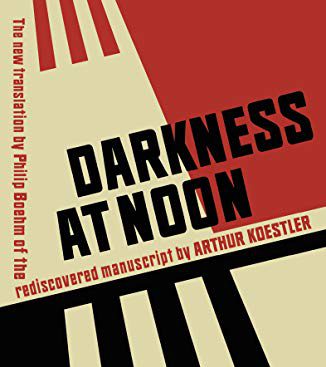 The recovered original of Koestler’s “Darkness at noon”, lost in 1940, now out in a new English translation

A new translation of the internationally acclaimed anti-totalitarian novel “Darkness at Noon” will allow the English reading public to read it for the first time as Arthur Koestler wrote it. A recent article in for “The Literary Hub” recounts the circumstances under which the original German typescript was lost and how it came about that an English version by a 23 year old art student, with no previous experience of translation, was used as the “source text” for all other translations for almost 80 years.

Koestler, a German citizen, was living in France at the time of writing the novel. Arrested as an “enemy alien” and imprisoned at an internment camp in the South, he had later been released but was still under strict police surveillance when he completed the book. For fear of a new arrest he fled Paris with his English girlfriend Daphne Hardy in May 1940, before the invasion of France by Germany. The original typescript was lost in the turmoil of the departure, and a carbon copy sent to a publisher in Switzerland seemed to have disappeared into thin air. The only existing copy of the novel, at that point in time, was an English translation done by Hardy, with Koestler’s consent, which she had mailed to publisher Jonathan Cape, in London. It was therefore Hardy’s version of the novel, published in London in December 1940, that introduced Darkness at Noon to the English speaking public worldwide and the one from which all other translations were made, “a rare occurrence in modern literature”, says the author of the article.  Within just a few years the book had been translated into 30+ languages and had become an international bestseller.

In 2015 a German graduate student stumbled by chance across the carbon copy of the novel, which had been thought lost, in the archives of Emil Oprecht, founder of the Europa publishing house, in Zurich. This finding led to a reconsideration of Koestler’s original text and of Hardy’s English translation. Despite having served the novel well for over seven decades, as the author of the article notes, Hardy’s text revealed the signs of the difficulties she had encountered: working in haste, with no dictionaries or other resources available for consultation, and little familiarity of the Soviet and Nazi totalitarianism regimes. Also, it did not include changes Koestler had made after she sent her text to London.

The new translation, which is the first from the original typescript, has just been published. The translator is Philip Boehm, a well known professional who has translated over thirty books and plays from German and Polish and who has lived behind the Iron Curtain. The editor is Michael Scammel, who is also the author of The Literary Hub article and of the book “Koestler: The Literary and Political Odyssey of a 20th Century Skeptic.”

Set in the time of Stalin’s show trials (Koestler does not specify which country the story is set in, but the political system he describes is the Soviet one), the book is seen by the author of the article as Koestler’s way to understand how powerful leaders “had been transformed into impotent defendants and manipulated to confess to crimes they had clearly not committed.” Rubashov is an “archetypal political prisoner”, says Scammel, and Darkness at Noon’s message “remains topical but also timeless, a warning to readers that is not to be ignored”.

As an aside, perhaps not many know that George Orwell’s “Animal Farm”, and “1984”, which appeared respectively five and nine years after Darkness at Noon, were inspired by Koestler’s ideas, and that Orwell himself pronounced Darkness at Noon a masterpiece. Looking forward to rereading it in this new version.

Source: “The eerily prescient lessons of Darkness at Noon” @ https://lithub.com/the-eerily-prescient-lessons-of-darkness-at-noon/