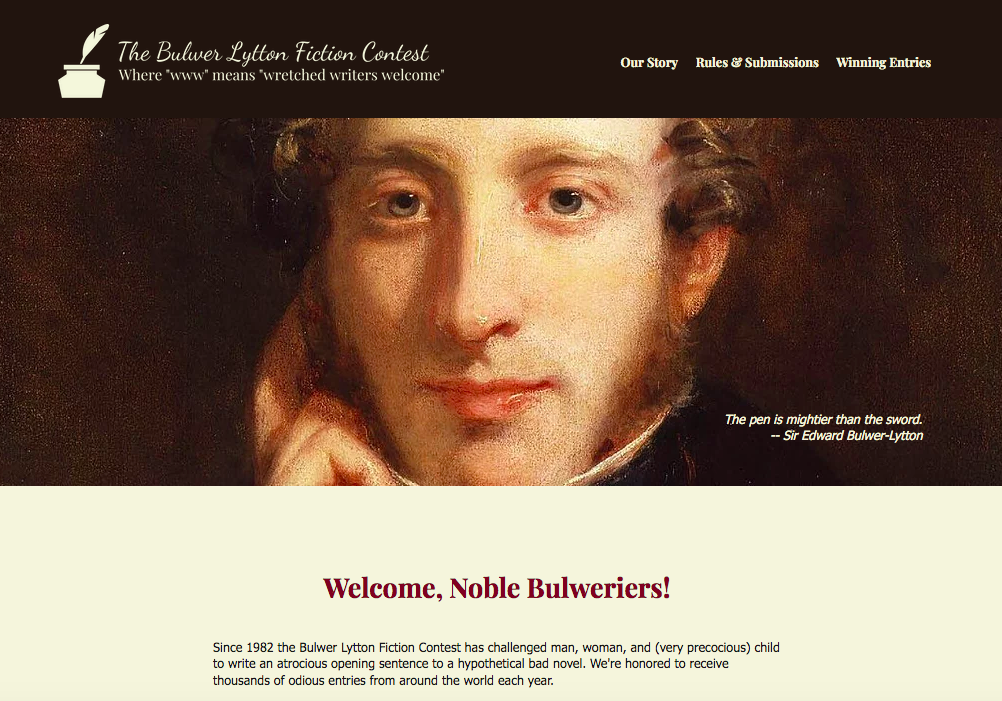 “From the pithy to the odious”: best and worst first lines in fiction

Hephzibah Anderson explores “the art of the perfect first sentence” in a recent article for BBC Culture. (1) Speaking of her own novel, Chastened, published in 2010 , she says the first line “can be a beast to get right”, in particular when it comes to longform fiction, where, considering the time and dedication that goes into writing, “the stakes are vertiginous”. Capturing the attention of readers is no easy task, besieged as they are by competing demands from rival books, never mind films and binge-worthy boxsets, she adds. The first sentence is the writer’s chance to woo the reader. “Make it enticing enough, pack in sufficient intrigue, atmosphere and character, and do so in a voice that’s compelling enough, and the reader will read on”. Some writers will spend months, if not years getting their opening line just right (Stephen King is one such case, it appears).

What is a “right” opening line, anyway? There are as many ways of beginning a novel as there are novels, and yet themes and trends are there for the spotting, says Anderson. Here are a few examples:

Concise, just three words, as in “Call me Ishmael” (Moby Dick, Herman Melville). Or incredibly long, the 119 words beginning with “It was the best of times, it was the worst of times” (A tale of two cities, Charles Dickens). Dickens is quoted by Anderson as having produced a number of near ideal openers. “Succint perfection” is how she describes “Marley was dead, to begin with” (A Christmas Carol).

Sweeping statements, such as: “All happy families are alike; each unhappy family is unhappy in its own way” are both “provocative and seductive” in their certainty (Anna Karenina, Leo Tolstoy), and the subtly ironic undertone of “It is a truth universally acknowledged, that a single man in possession of a good fortune, must be in want of a wife” (Pride and Prejudice, Jane Austen) makes it an opener almost on the level of Dickens.

“Anomalies paired with the humdrum” can have an especially alluring effect: “It was a bright cold day in April, and the clocks were striking thirteen” (Nineteen Eighty-Four, George Orwell). What about the power of “mood”? “It was a queer, sultry summer, the summer they electrocuted the Rosenbergs, and I didn’t know what I was doing in New York” (The Bell Jar, Sylvia Plath). Its eerie aimlessness, says Anderson, is made still more affecting for having been published less than a month before Plath’s suicide.

And, often, some of the most celebrated first lines “owe their might” largely to what follows: “There was no possibility of taking a walk that day” (Jane Eyre, Charlotte Bronte), and “Last night I dreamt I went to Manderley again” (Rebecca, Daphne du Maurier).

So what are the rules of writing a great opening line? Unsurprisingly, says Anderson, for writers with talent enough, there are none. And, actually, some excellent novels have entirely forgettable first lines. Madeleine L’ Engle, for example, even got away with repurposing a cliché in her book A Wrinkle in Time that was so mocked that a prize for worst opening was named after its author. In his time, Bulwer-Lytton was more widely read than Dickens but it’s for his opener “It was a dark and stormy night” that he is best remembered. Every year, since 1982, the San Jose State University’s holds the “Bulwer-Lytton Fiction Contest”, in which entrants are asked to to write “an atrocious opening sentence to a hypothetical bad novel”. (2) “We are honored to receive thousands of odious entries from around the world each year,” reads the website home page! In any case, Anderson concludes, there is always the novel’s jacket, which an entire team of professionals have laboured to ensure that it sends precisely the right message, “so we’d be dolts to place too much emphasis on its opening sentence”.

1) What are the first best lines in fiction?, Hephzibah Anderson, BBC Culture, October 29, 2019. Hephzibah Anderson is a graduate of Cambridge University where she read English. She is a writer, journalist and broadcaster. She has judged the Independent Foreign Fiction Prize, the Jewish Quarterly/Wingate Award, the Author’s Society’s Betty Trask Award and the PEN New Voices Prize.