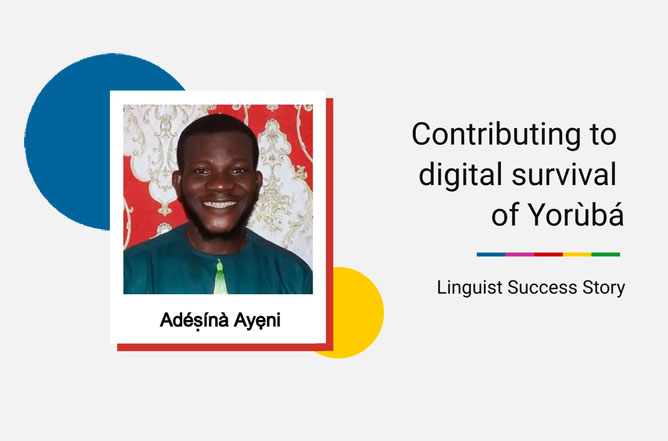 Adéṣínà Ayẹni is a Nigerian Yorùbá language and culture advocate, anthropological researcher and translator. Yorùbá is a language spoken in West Africa, mostly in the South-West, by ethnic Yorùbá people. Despite having an estimated 45-55 m speakers, it is still a low-resource language. Over the years, Adéṣínà has advocated for digitally underrepresented languages such as Yorùbá to be considered by global service providers and institutions, in many different ways. He provided Yorùbá translations for the UN, Wikipedia, several TedTalk episodes, and reached out to  companies to request their products (including video games) to be localized for Yorùbá. In recent times Adéṣínà heard of the Data Marketplace and thought this was an opportunity not to be missed. His dataset of about 2,000 segments in the English-Yoruba language pair in the science, technology, and medical domains — of which 80% are his own, and 20% are translations done by other translators on his online Yorùbá platforms — is now up for purchase on the data marketplace. Once acquired, AI and ML services providers will be able to train their systems to function in Yorùbá, creating an equal level of access to Yorùbá. “My main motivation has always been contributing to the digital survival and representation of my native language Yorùbá. It’s just a plus that I can make money while serving this higher purpose,” says Adéṣínà.

“We have stories to tell… Contributing to the digital survival of Yorùbá”, TAUS blog, December 22, 2020