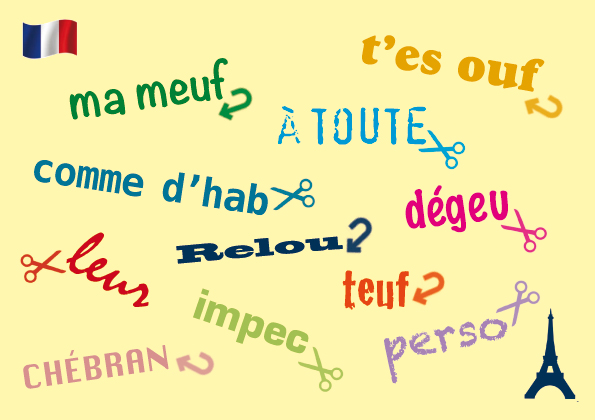 Some of the words in bold in this brief text are in “Verlan”, a unique French slang where letters or syllables in words are inverted to form a new word (meuf, ouf, relou, teuf). Verlan itself is an inversion of the word l’envers, literally “back to front”. Other words in bold in the text are “apocopes”, terms that have been truncated (anniv, dispo, apéro, comme d’hab, resto, ciné). Words can be truncated in different ways. In apocopes, a word’s final syllable or syllables are cut off; in “apheresis” it is the the first part or first syllable that is suppressed. The latter gives rise to monosyllabic words that are often difficult to identify (e.g. leur for contrôleur). To complicate matters even further Verlan can be double, or even triple. Meuf, a Verlan word for “woman” (femme), got “re-Verlaned” to become feumeu. Also, sometimes, the final syllables are duplicated, creating terms like ziczic for musique. Verlan, apocopes and apheresis are increasingly becoming part of mainstream French culture, including in films, TV series, popular music (in particular rap), journalism and modern literature. Figuring out the meaning of these new terms and expressions can be quite a challenge for a French translator.

From the banlieues to mainstream French

Verlan was first used as a cryptolect by gangs in 19th century France and, supposedly, also during WW II. It then became popular in the 1980s-90s among the offspring of immigrants from former French colonies (Algeria, Morocco, etc.), living on the outskirts (banlieues) of large cities such as Paris and Marseille. (2) It was a way of self-identification, of excluding the uninitiated, and a form of social protest. Today many French people use some degree of Verlan, regardless of age, ethinicity, gender or social class.

Numerous immigrant languages have influenced modern French slang, leading to various forms of code-switching and code-mixing at the lexical level. There are words that come from Senegalese, Arabic and Romani, to name but a few. It is not exclusive to French but an increasing number of English loanwords have also made their way into French slang, e.g. le shit, sniffer (of drugs), as well as in the French language in general: weekend, jogging, scoot, cool, job, briefing, meeting, brunch, fun, call, etc.

Modern French slang has had difficulty penetrating into literature, says Stella Linn, a researcher in translation studies, literature of migration and literary sociology at the University of Groeningen (NL). However, she adds, this is now beginning to change, with urban youth discourse appearing in a number of novels, mostly by young “post-migration” writers such as Faïza Guène, Insa Sané and Rachid Djaïdani. There are also novels written by native French authors that feature young slang speakers.

If we apply the “credibility principle”, Linn says, then translators must ensure that target language readers feel they are being presented with “authentic” street language. However, she adds, as the readership can be very varied in terms of age and background, it is preferable that translators do not choose the latest neologisms but appeal to already established slang, even if this creates a new contradiction beyond the temporal paradox.

Moreover, says Linn, on account of the subversive connotations mentioned above, translators should be aware of the ideological or political implications of their choices. This challenge calls for suitable translation aids, e.g. resources such as http://www.urbandictionary.com or, for French, http://www.dictionnairedelazone.fr, as well as blogs, sites displaying rap lyrics and forums that allow consultation with native speakers, such as http://forum.wordreference.com

Therefore, what is needed in many cases is a flexible approach, says Linn, where translation is not about reproducing all the individual stylistic features but rather their sociological effect in order to achieve “functional identity”. This is where “compensation” comes in: “a technique for making up for the loss of a source text effect by recreating a similar effect in the target text through means that are specific to the target language and/or the target text”.

Eleanor Glewwe, Visiting Assistant Professor at Grinnell College, has conducted a study on four novels translated from French. She says the use of “compensation” was not sufficient to offset the sharp reduction in slang density from French to English. French constructions tended to be translated into Standard English so that a fair amount of non-standard French was lost in translation, she says, and she suggests that more research is necessary, on different language combinations, to see if this reflects a more global trend.

The Académie Française was set up in 1635 by Cardinal Richelieu, the principal minister to King Louis XIII. Its main function is to maintain and preserve the purity of the French language. This function is currently facing the test of the increased prominence of English (see our article on this topic at this link). The Académie Française has not released any comments or even acknowledged Verlan in their most recent dictionary and a search for “Verlan” in the Académie’s website produces no results.

Looking to the future

According to linguist Laura K. Lawless, founder of the French learning platform Lawless French, who is a big fan of Verlan, while the words that have entered common parlance seem here for good, the language isn’t developing much (with the exceptions of a few re-Verlaned words). She says that Verlan isn’t influencing today’s slang to the same extent as it did in the past. “Nowadays, youths are preferring to use text speak, English words, and even Arabic-influenced words when they want to use slang”.

1) Translation: “It’s my wife’s birthday today, if you are free we could have drinks at my place, go to the usual nice restaurant around the corner and then to the movies to see “45 years”. “Are you crazy? That’s a really boring movie, lets go and party at Maxime’s instead”.

2) The term banlieues refers to the deprived districts on the periphery of major cities, where large groups of immigrant workers were housed in the booming post-war period, for the most part in high-rise social housing projects.