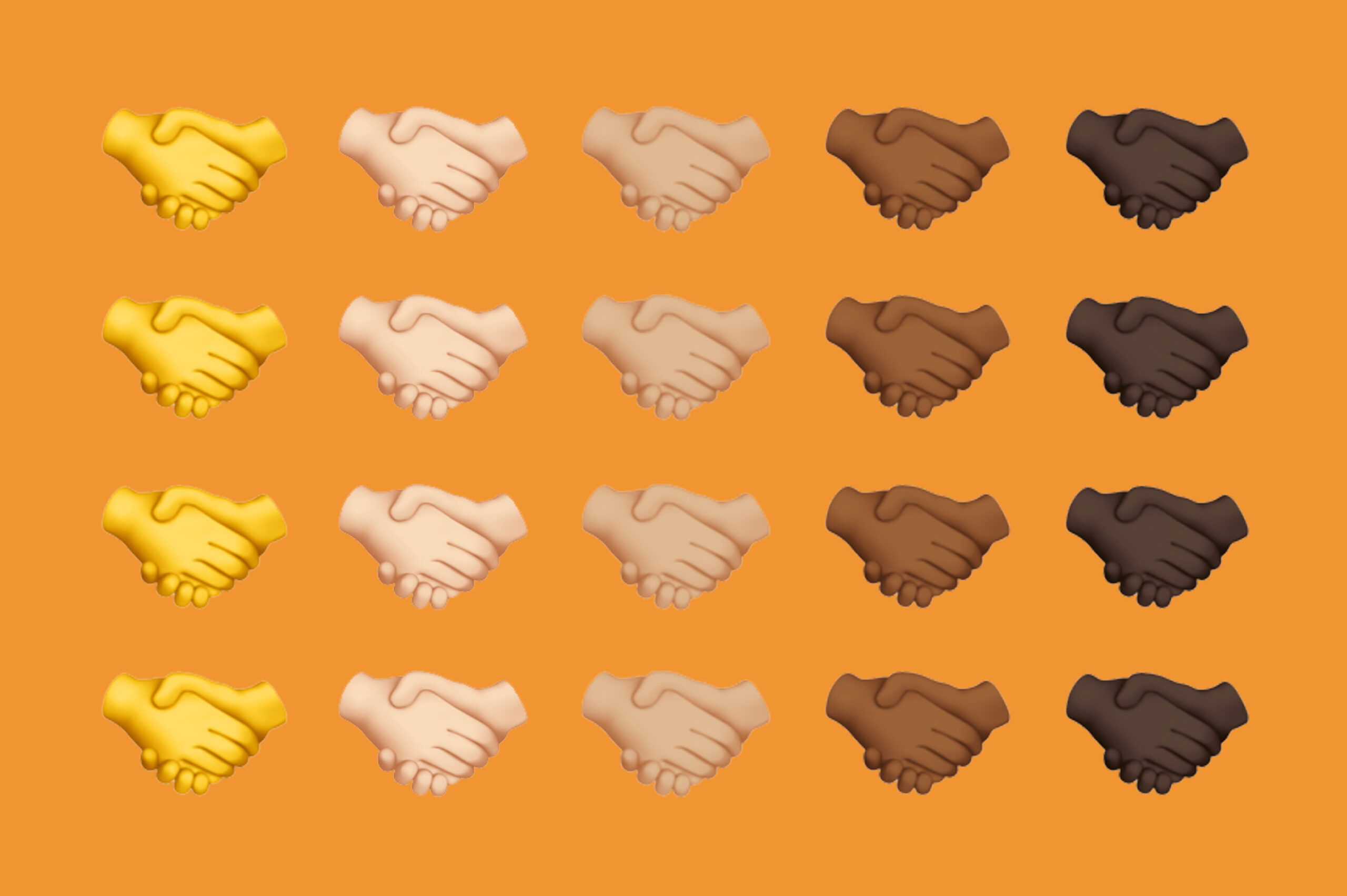 In 2015 the Unicode Consortium introduced the possibility to choose from different skin tones when using emoji of faces, gestures and people. This was part of an overall effort, on the part of the consortium, to improve diversity and inclusivity in emoji online communications (1). However, this move has also opened up a complex conversation around identity and digital self-expression. Since 2015, says award-winning author and “spiritual advice columnist” at Wired, Meghan O’Gieblyn, “trepidation about which emoji skin tone to use has weighed on many white people’s minds”. Many users report feeling uncomfortable in situations where they don’t know which skin tone will be appropriate. White users worry that using the lighter shade of skin tone may be a way of flaunting their “whiteness” or displaying “white pride”. Using darker skin tones, on the other hand, risks being perceived as “grossly appropriative”.

O’Gieblyn says that the original yellow, which she refers to as the “Esperanto” of emoji skin tones, “seems to offer an all-purpose or neutral form of pictographic expression, one that does not require an acknowledgment of race, or, for that matter, embodiment”. But is this truly the case?” A 2021 University of Edinburgh School of Informatics study on nearly 500 participants, half self-identifying as Black and half as White, revealed that text messages and social media posts that contained yellow emojis were not seen as neutral but as having been written by White people. The results of the study also highlight that even supposedly neutral options can carry social meaning, which may advantage some groups over others.

The intent of the consortium was good, says journalist Paige Tutt, who identifies as Black, writing for The Washington Post, but the diversified skin tone emoji have inserted race into texts and tweets where it never would have arisen before. Predictably, she adds, many people are using the multicultural emoji to refer to race, and in the worst ways possible. In any case, as O’Gieblyn says, “despite the range of skin tones available”, “the broad strokes of these pictographs fail to capture the complexities of individual identity” Indeed.

Representation at the cost of universality?

Shigetaka Kurita, the Japanese designer who has been credited for creating the first set of 176 emoji in 1999, has said that he envisioned his set of emoji as ideograms to represent broad ideas, and that contemporary emoji may have strayed from this founding principle. A cocktail glass could suggest “cocktail” in the abstract, or that it’s time for drinks, or that you’re waiting at the bar, depending on the context, says American academic and video game designer Ian Bogost. The train pictogram could represent a light-rail line, a subway, a toy, and so on. Emoji are instead becoming more and more specialised. At the time of writing there are 3,664 approved emoji and about 30 more are planned for 2023. This increased emoji representation comes at the cost of losing their “universality”.

Why true representation is unrealistic

Echoing O’Gieblyn’s words, Bogost notes that no matter how many more emoji are added, it will never be possible to represent “the entire gamut of human experience”. The proof is that despite Unicode efforts to improve diversity, many communities have not felt sufficiently “represented”. A 2021 survey conducted by Adobe on frequent emoji users in seven countries (US, UK, Germany, France, Japan, Australia, and South Korea), found that 83 % wished for a more inclusive representation. Some communities have even created their own pictographs reflecting local culture and values (e.g. Finland and West Africa, see also footnote 3). More recently, a group of physicians, patient advocates and volunteers launched an online campaign for more “medical” emoji to be approved by UNICODE.

Emoji are no longer what they used to be …

All those new emoji are great, Bogost says. But as they have become more specific in both their appearance and their meaning they are transforming into a large catalog of fixed portraits, rather than a smaller set of flexible ideograms. “That shift doesn’t just add to emoji; it also changes how they work”.

(1) Some commentators have said that incorporating skin tone modifiers cost these companies very little, and that the feature amounts to empty gesticulating, “a big horse and pony parade … to appease people of color” (Paige Tutt, The Washington Post, quoted in the Wired article). A box-ticking exercise of sorts.

(2) The default yellow is also associated with the The Simpsons, says O’Gieblyn, where it was used solely for Caucasian characters (those of other races were shades of brown). She quotes the writer Zara Rahman as saying “To me, those yellow images have always meant one thing: white”.

“A ‘Panic’ Emoji Is Coming to Smartphones—Along with These Other Keyboard Icons”, Charlotte Hilton Andersen, Reader’s Digest, November 9, 2022

“Which skin color emoji should you use? The answer can be more complex than you think”, NPR News, February 9, 2022

“The problem with emoji skin tones that no one talks about”,  Zara Rahman, Daily Dot, January 18, 2022

“Apple’s new diverse emoji are even more problematic than before”, Paige Tutt, The Washington Post, April 10, 2015