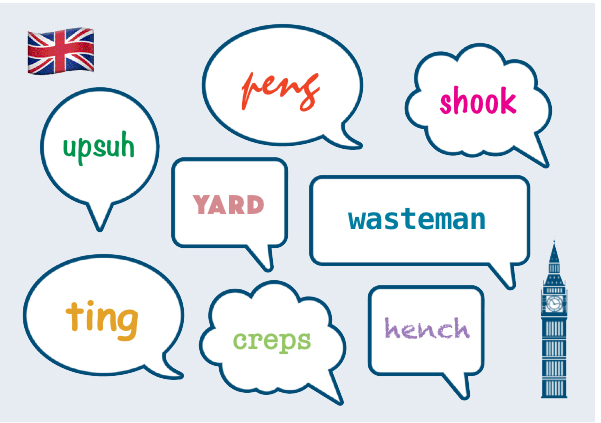 “Hench, peng, shook … if you don’t know what any of these mean, you’re nothing more than a wasteman. MLE is sweeping the country!” These are the opening lines of recent article in The Guardian, which refer to “Multicultural London English”, a dialect which has its roots in the patois spoken by Caribbean migrants who arrived in London after WWII. “Hench” means “muscular”, “peng” is “good”, “shook” is “scared” and “wasteman” is “a useless person”… When it first emerged MLE was spoken mainly by young working class people living in neighbourhoods with a high level of immigration. In recent times it has spread all across the UK, so much so that linguistics experts say that most people in the country will probably use some version of it in the not too distant future. MLE is still mostly a spoken language, but it is increasingly appearing in writing, in music lyrics, TV scripts, online forums and messaging, and has been popularized by famous public figures such as footballer Raheem Sterling and musician Stormzy, who grew up speaking it.

Paul Kerswill, Emeritus Professor at the Department of Language and Linguistic Science, University of York, is one of a group of researchers who have studied the rise and use of MLE. On his “Multicultural London English page” he explains that MLE has emerged since the early 1980s in parts of London with a relatively high level of immigration. The seeds that 40 years later would become MLE were planted by the first major group of post-WWII immigrants from the West Indies (the Caribbean), who brought their language: Jamaican Creole or patois.

MLE has many other ancestors too, says Prof. Kerswill, which is obvious considering the large number of other languages that immigrants brought with them, ranging from Punjabi, Bengali and Tamil to Yoruba, Akan, Arabic and Turkish – and many more still. “Many of the people who spoke these languages learnt English after they arrived, and like almost all adult learners they spoke it with a ‘foreign’ accent. This foreign accent formed part of the linguistic melting pot that made up the input to MLE”.

MLE cannot be attributed solely to the effects of post-war large scale immigration from the former British colonies, says journalist and researcher Sanjana Varghese, author of an article for the New Statesman. The cultural influences of the Caribbean have also shaped its development, she adds. Caribbean English in the 1960s and 1970s was carried into everyday language through music like ska and reggae from immigrant communities. By the 1980s, a dialect that had been predominantly associated with ethnic minorities began to gain prestige on playgrounds, streets and clubs in parts of London. “In plain English, MLE became cool”.

By the 1990s, Tony Thorne, a British author, linguist and lexicographer, widely considered a leading authority on language change and language usage across the English-speaking world, says that he recorded white working-class school kids crossing and code switching with “recreolised lexis”, or what the mainstream media called “Jafaican”. The UK “grime” scene and US hip hop vocabulary and intonation patterns augmented these trends, he says (“grime” is a genre of electronic music). “Language from gang culture and word of mouth, in combination with these previous influences, enabled MLE to become a driving force in linguistic change today“.

Prof. Kerswill says MLE is based on the traditional East End Cockney dialect, but it has a number of different sounds and grammatical constructions. For instance, unlike Cockney, where speakers drop their “aitches”, MLE speakers always pronounce them, as in house, instead of Cockney ‘ouse. The author of the article in The Guardian explains that MLE is characterised by long vowels made in the centre of the mouth; for example, “go” will rhyme more closely with “more” than “mow”. Also “th” words like “thing” and “thank” often become shortened to a hard “t” (“ting” and “tank”) or “fing” and “fank”.

Pronunciation Studio, a London-based English learning online platform, set up by group of specialist IPA Certified teachers, has published a very useful MLE Pronunciation Guide. The guide explains, via text, recordings and phonetic symbols, MLE stress and intonation and how to pronounce the MLE vowel and consonant sounds, comparing both to the standard English pronunciation and to Cockney. People who speak MLE in cities including Birmingham, Leicester and Manchester, the guide warns, will also throw in flavours of the local accents in those places.

The article in The New Statesmen provides some examples of MLE terms including “bare” (very) and “gassed” (full of oneself, or overwhelmed) and “creps” (fashionable sports footwear). Some terms mock “uptight” English phrases such as “Oh my days!”, used with the same intonation as “goodness gracious!”. Others are just phrases, like “innit” for “isn’t it”, or “you get me”, used at the end of a sentence or question. In text messages “wagwan” (a way to say “what’s going on?”) becomes “wag1” and “you get me” becomes “ygm”.

Prof. Kerswill mentions how grime artists use the word “man” in a new way, as in Big Shaq’s ‘Man’s Not Hot’ (Big Shaq is a fictional rapper in an online series). This is a new pronoun, and it means the same as ‘I’. “Mandem”, refers to men and boys, or your (male) friends, and “gyaldem”, to “girls” or “women”. In his “Multicultural London English page Prof. Kerswill also provides links to recorded examples of MLE and other London accents. More MLE terms and phrases can be found in an article for BBC Radio 4 at this link.

Multicultural languages in other countries

Mixed varieties of the same type as MLE have appeared in other European centres, says Tony Thorne, and those in Germany (influenced by Turkish), France (influenced by North African and Arabic language) and Scandinavia (Turkish, Arabic, Somali), in particular, are the subject of research. Cities around the world with similar African-Caribbean diasporas, such as Toronto (Canada), have also seen the growth of patois-influenced slang in youth lexicon.

Is MLE is here to stay?

MLE has the potential to change English forever, even outside of “yoof (youth) culture”, says Tony Thorne. “This can already be seen not just in young white and Asian people consciously imitating the sound of Jamaican, but in a new rhythm and emphasis in everyday speech”, he adds. “If you hear but can’t see the speaker, it’s impossible to determine their ethnicity”.

It’s evident that MLE is here to stay, claims Sanjana Varghese. “It’s a fundamental part of how languages are actually formed throughout the world, and many English words are bastardizations of other European tongues. Just like all other languages, so too must English mutate and change to remain both relevant and useful, you get me?”

Only time will tell…