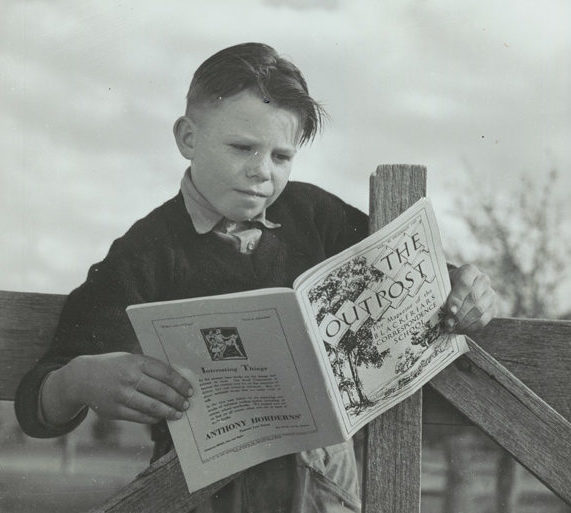 “Distance education” is not a new concept, it is actually much older than Zoom, Google Classroom, or even the internet

We will probably remember 2020 as the time when “distance education” exploded. But its history goes back at least three centuries, starting in the early 18th century with the first correspondance courses in Boston. September 15 marked “National Online Learning Day”, which is celebrated annually in the US since 2016, and, given the relevance of this topic in COVID-19 times, we thought it might be interesting to look back to the origins of distance education and its historical significance.

The inspiration for the early pioneering programs is hard to establish. Some academics say that in its early days correspondance study was inspired by democratic ideals and liberal thinking, and its aim was to offer educational opportunities for those who were not among the higher classes, who could not afford full-time residence at an educational institution or who lived in remote geographical areas. But it was the demand by industry, government, and the military for vocational training that pushed distance education to new levels.

The development of distance education is inextricably linked with the prevailing technologies of the day and has evolved from snail mail to phonograph, radio and telephone, through to TV and internet. Today, in times of COVID-19, with millions of schools closed or with limited access all over the world, does distance education have the potential, once again – to have a role as “opportunity equalizer”?

Caleb Phillips, an american teacher, planted the first seeds of distance education when, in 1728, he placed an advertisement in the Boston Gazette about a correspondence course in shorthand. He promised that students “may, by having the several lessons sent weekly to them, be as perfectly instructed as those that live in Boston”. Correspondance study did not, however, really catch on until the 19th century, with the improvements in the postal system. Sir Isaac Pitman (1813-1897) was a teacher of English who developed the most widely used system of shorthand, known now as Pitman shorthand. His company, Isaac Pitman and Sons, was one of the world’s leading educational publishers and training businesses of the time, with offices in London, Bath, NY, Melbourne, Johannesburg, Toronto and Tokyo. In 1840 Pitman started a correspondence course teaching his revolutionary shorthand system. He would transcribe a text into shorthand on a postcard and send it to his students, who would in turn send back their work for corrections. This scheme was made possible by the introduction of uniform postage rates across Britain in 1840. In 1858 Queen Victoria of Great Britain signed a charter that allowed the University of London to provide distance-learning degrees to people no matter where in the world they studied. The University of London was the first university ever to offer distance learning degrees.

By the middle of the 19th century mail-order courses had been established in many different countries. In Europe the “Society of Modern Languages” in Berlin offered correspondence courses in French, German, and English. In the US, companies such as Strayer’s Business College of Baltimore City (now Strayer University), founded in 1892, included mail-order business correspondence courses. In 1890, the “Colliery School of Mines” created a correspondence course on mine safety, which, over the next 30 years, evolved into the “International Correspondence School”. In 1892 the University of Chicago established the first university-based distance education program in the US.

How correspondance study helped further the education of women

For women living at the time of Philip’s shorthand course in 1728, education was seen mainly as a way of making better wives and mothers, and lessons were often taught in the home by governesses. One UK parliamentary report in the 19th century said girls should be educated to be “decorative, modest, marriageable beings”. Only the privileged few were taught to a high level in subjects such as mathematics, and this was usually alongside their brothers. Working class girls, if they were educated at all, were taught the very basics of reading, writing, arithmetic and domestic skills. The slow process of education reform for women began in the 19th century, as attitudes changed, but many challenges remained.

The “Society to Encourage Studies at Home” was founded in 1873 by Anna Eliot Ticknor (1823-1896), daughter of a historian and Harvard professor. Its purpose was “to induce among ladies the habit of devoting some part of every day to study of a systematic and thorough kind.” Working out of her home with her Committee, she helped to open the door to higher education for more than 7,000 women. In 1900, Martha Van Rensselaer (1864-1932), a teacher at Cornell University, and a suffragette, organized a remote education program to reach out to women in rural areas in the state of NY. The program enrolled over 20,000 women in under five years.

By 1923, the “International Correspondance School” had 2.5 m students, but mail was losing its place as the preferred method of long-distance exchanges. Live radio shows allowed educators to talk directly to students at home and, by 1934, the University of Iowa was broadcasting televised courses, and by the late 60s educational institutions were using both radio and TV technologies. In the 1980s, the “National Technological University” started using satellite TV to deliver a combination of live and recorded course material. It also let students call their instructors by phone and get questions answered on air in real time. The real turning point in the remote education journey came about in the late 20th century, with the advent of internet. The Jones International University, founded in 1993, is the first completely internet-based higher education institution accredited by the US Higher Learning Commission. These days we can study from anywhere in the world.

We are living a truly transformative moment in history, for educators and students alike, and it is difficult to tell how the post-COVID-19 situation will evolve. It is possible that hybrid, part face-to-face, part online, models of education will become more common with the gradual return to normality. Distance – online – education has the potential reach out to the entire world and offer educational opportunities for students, both children and adults, who might not otherwise have access to them. But communications infrastructure is critical: students need access to reliable internet, and devices with which to make use of it. The huge digital divide across countries, and even within countries, is a major limiting factor for its role as “opportunity equalizer”. Internet and devices are still limited to a privileged few: it may be time to reconsider “older” technologies.

“The Evolution of the Character and Practice of Distance Education”, Börje Holmberg, Open Learning, June 1995, pg. 47-53