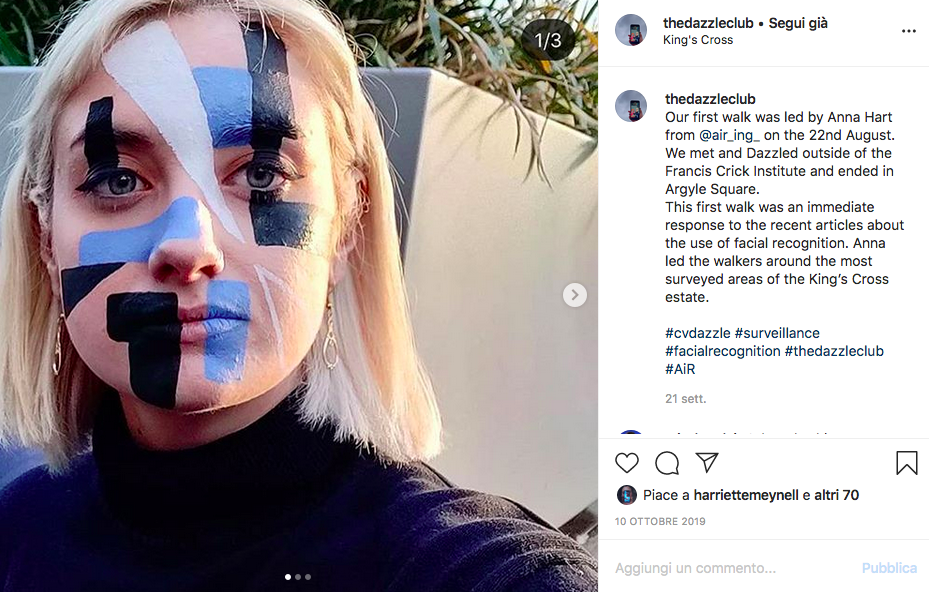 Activists are fighting facial recognition AI with face paint. They use cubist-inspired designs to foil algorithms

An article in the Moscow Times reports that Russian activists were arrested in February for holding a “face paint protest” against facial recognition technology. The Telegram-based campaign, called Sledui (Follow), advised followers to paint their faces with bright, asymmetric patterns and thick black marks to throw off facial recognition. Moscow has one of the world’s largest video surveillance networks, with over 170,000 cameras around the city. Facial recognition technology is due to be introduced shortly also in the Moscow metro. While the authorities say the technology is necessary to catch criminals, many have spoken out against what they see as non-consensual identification and the potential for private data to be sold to third parties.

In the UK the Dazzle Club, founded by four artists in 2018, holds monthly silent walks through different parts of London where participants are asked to paint their faces in a style called “CV Dazzle”, which uses cubist-inspired designs to thwart the computer. The name of the club is inspired by a type of World War I naval camouflage called Dazzle, which was used to conceal the orientation and size of battleships. Their aim is to provoke discussion about the growing using of facial recognition technology in the UK. London is also ranked as having one of the world’s highest concentrations of closed-circuit television cameras and is increasingly seeking to switch to cameras with facial recognition technology.

The idea of face camouflage to beat facial recognition algorithms was originally developed in 2011 by Adam Harvey, a US researcher and artist based in Berlin, focused on computer vision, privacy, and surveillance. In addition to “CV Dazzle” (where CV stands for computer vision), Harvey has developed the “Anti-Drone Burqa” (camouflage from thermal cameras), “SkyLift” (a geolocation spoofing device), and “MegaPixels” (a research project that investigates the ethics, origins, and individual privacy implications of face recognition image datasets and their role in the expansion of biometric surveillance technologies). Harvey has contributed op-art about dazzle to The New York Times and fans have even held facial dazzle parties.